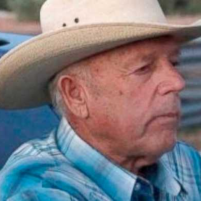 Muir, Abbey, and their ilk harbor equal (or, perhaps, greater) contempt for the farmers and ranchers who inflict the “hoofed locusts” on Mother Earth. The “locust” farmers/ranchers, like the “destructive” critters they produce, must be eradicated (humanely, of course), say the activists. That is why Cliven Bundy (shown) and his family’s ranch in Clark County, Nevada, are now in the headlines.

In the 1980s, a broad coalition of the major enviro-actvist groups targeted cattle ranching for extinction. Specifically, they initiated a multi-pronged, long-term plan to evict livestock from the vast “public lands” of the Western states. They planned to drive out all the ranchers by 1993, thus their slogan at the time: “Cattle Free by ’93.”

Some of that plan was detailed at a “Public Interest Law Conference” held March 7-10, 1991 at the University of Oregon School of Law in Eugene, Oregon.

A key presenter at the conference was Roy Elicker, counsel for the National Wildlife Federation. Central to Elicker’s message was the point that ranchers could be driven off range, the “public lands,” by simply driving them out of business with costly fees and regulations.

“In other words,” he told the conferees, “if you start making them pay their true cost of what they’re doing, they’re going to fold up. They can’t — if they got to go out and move that cow around six times, by the time they’re done, they’ve lost their shirt.”

So, the activists must work closely with the politicians and the federal and state agencies to make it too expensive for the ranchers to stay in business — force them into bankruptcy.

Elicker warned the attendees that they would not be able to accomplish this overnight; it was a plan that would take years, but would gradually yield big, permanent results.

So one of the keys is, when I talk about opportunities to make a difference, is not only the fact — you know, what everyone likes is the big victory. You load up them cattle trucks for the last time and it goes riding off into the sunset and they never come back.

That comment and vision for the future drew laughter and applause from the audience. Elicker continued:

The plan outlined by Elicker (and others) was implemented by the National Public Lands Grazing Campaign (NPLGC) and other Big Green allies. A key component of that campaign has been to falsely portray ranchers such as the Bundys as “welfare ranchers.” Over the past couple of decades, the overall campaign has been very successful in driving many ranchers off the land.

Of course, this is the same strategy that was publicly announced by then-Senator Barack Obama, as he campaigned for the White House in 2008, when he assured his “green” backers that he would escalate the “war on coal.” Candidate Obama promised:

So, if somebody wants to build a coal plant, they can — it’s just that it will bankrupt them, because they are going to be charged a huge sum for all that greenhouse gas that’s being emitted.

Obama’s Region Six EPA Administrator Al Armendariz carried this philosophy to its logical conclusion, advocating that EPA officials use their “authority” with brutal efficiency. Armendariz said that his philosophy of enforcement “was kind of like how the Romans used to conquer little villages in the Mediterranean. They’d go into a little Turkish town somewhere, they’d find the first five guys they saw, and they would crucify them. And then you know that town was really easy to manage for the next few years.”

According to Armendariz, you find folks who are not in compliance with the EPA’s constantly changing, draconian edicts, and “you hit them as hard as you can, make examples of them. There’s a deterrent there.”

The problem for Armendariz was that his comments were videotaped and went viral on the Internet, forcing him to tender a hasty resignation, in order to spare his boss political blowback. (To see a YouTube video of his remarks, click here.)

So it goes against all of the natural resource industries that are essential to sustaining a large, modern, industrialized society: farming, ranching, mining, logging, energy, fishing — all of these are under concerted, coordinated attack.

In the case of the current Bundy ranch/BLM conflict, one of the main hired guns of the Big Government/Big Green combine is the Center for Biological Diversity (CBD). As one would expect, the wealthy urban green militants at CBD claim to be watching out for all of the furry, fluffy, feathery, scaley creatures whose habitats are threatened by the big, bad invasive species, Homo Ranchero.

Environmentalists accused the bureau of capitulating to threats of violence from armed Bundy supporters and urged them to pursue action against the rancher. “The BLM has a sacred duty to manage our public lands in the public interest, to treat all users equally and fairly,” said Rob Mrowka, senior scientist with the Center for Biological Diversity. “Instead it is allowing a freeloading rancher and armed thugs to seize hundreds of thousands of acres of the people’s land as their own fiefdom.” “The BLM is setting a dangerous precedent in announcing that it will pick and choose who has to follow federal laws and who it will reward for violating them,” he added. [Bureau of Land Management spokesman Craig] Leff declined to comment, reiterating that the bureau’s top concern was the safety of its employees and the public. In April 2012, the Center for Biological Diversity filed a notice of intent to sue the bureau for canceling a planned roundup of Bundy’s cattle at the last minute.