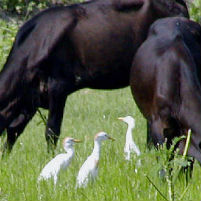 Spring officially began March 20, and the blooming daffodils and flowering pear trees were the earliest signs of it. But south on FM 3129 toward Hwy 77, sure signs of Spring are everywhere. Redbuds and dogwoods blooming, wisteria garnishing fences and trees, purple and white irises popping out of the ground, and large round bales of fresh hay dotting the fields are shouting “Spring is here!”

But the most exciting sign of spring is the return of the white cattle egrets following the black angus cows in the pasture along the road. This symbiotic relationship is indeed an interesting one, not familiar to most city folk. The cattle egret came to the states from Africa by way of a hurricane. They blew into the south, quickly adapted, and eventually moved north. They may be seen on the back of cattle here, or elephants in Africa. But wherever they are, they are finding a good meal. Whether eating ticks off the cows’ backs, or bugs on the ground (stirred up by the cows), or worms in the dung, the egret, a type of medium heron, helps cut down the insect population and keeps the cows healthier. This form of symbiosis is called mutualism or commensalism. Some authorities don’t believe the cow benefits from this relationship and so call it commensalism, but others, do, and thus call it mutualism. Whatever, it makes for a beautiful pastoral scene.

0 thoughts on “Harbingers of Spring”