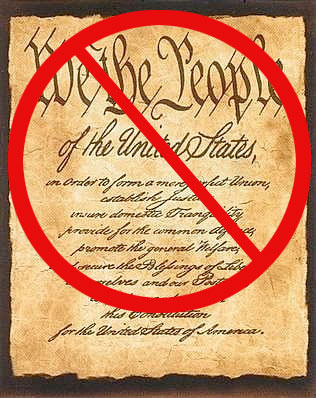 On Monday, the Commissioners Court voted to ban from Judge Lacy’s office any materials that expressed any political point of view.

Tom Whitten, Precinct 2 Commissioner, in response to Emily Sabo’s complaint during the public comments period of the previous Court that Judge Lacy had a magazine from a “socialist” organization in his office, introduced the following agenda item:

Discuss and take possible action allowing employees and elected officials to display materials/magazines/documents and other items expressing a political activity or point of view.

The magazine in question is The New American, a publication of the John Birch Society. As Whitten read their mission statement, it was obvious that the magazine advocates the opposite of socialism, but Whitten insisted that materials of this sort be removed from Judge Lacy’s office, stating that it violates county guidelines.

The relevant portion of the Bowie County personnel policy reads:

Bowie County employees, with the exception of elected officials, are not allowed to participate in political activities while on duty working for Bowie County. No Bowie County property such as equipment, buildings or vehicles can be used to display campaign materials and may not be used for any other political activity.

According to county legal advisor Carol Dalby, she and her boss District Attorney Jerry Rochelle discussed and agree that publications such as The New American are prohibited under the policy. Ironically, while neither the John Birch Society nor The New American have ever endorsed a political candidate, it would seem their interpretation would ban the Texarkana Gazette, as well as any other publication that endorses a candidate or displays their advertisements. (At my last visit, the table in Lacy’s waiting area held copies of the Texarkana Gazette, as well as several other local, regional, and national publications.)

Whitten asked for a roll-call vote, stating that a “no” vote would be in direct contradiction with the county legal advisor and the District Attorney. Lacy said that a “yes” vote agrees with their interpretation, and that a “no” vote stands by the personnel policy as it reads. County legal advisor Carol Dalby stated that “Mr. Rochelle and I both have determined that it would be a violation of the county policy,” to which Judge Lacy responded, “It’s not the first time they’ve been in error.”

Precinct 4 Commissioner Mike Carter remarked that the county had more important things to consider than a vendetta against the county judge, which prompted applause from the audience.

It is relevant to note that, although the agenda item addressed “employees and elected officials,” according to Whitten’s motion, which he read from his notes, only the offending material in the county judge’s office is to be “immediately and permanently removed.”

Lacy noted that almost every publication the county receives “deals with political activity…. Politics is the science and art of governing.”

Judge Lacy finished with this statement:

“The Constitution is laying there that people can pick up and carry off, a copy of the Constitution. If that’s not political activity… it’s a formation of a particular form of government opposing all others. The Declaration of Independence is there also. And the biggest item out there for people to read from while they are waiting to see me is a Bible. And our founding fathers quoted John Locke, a British theologian, so much, there are so many phrases in the Declaration of Independence from him and in his two treatises on civil government, he quoted and cited the scriptures 1,509 times. If you are saying [the motion] has anything to do with the science and art of governing civil government… I don’t know if I have anything out there that wouldn’t fall under that definition.”