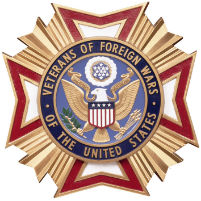 Queen City Memorial VFW Post 5870, located off FM251E, had their last fish fry for the season. They are held on the first Saturday of every month, March, April and May, then, again, September, October and November. “We used to do it in the summer, but it got so hot, we decided to give the cooks a break,” said Bill Brockett, Commander of the post. They average $600 per fish fry which goes to their scholarship fund. “We contact both Queen City and Atlanta High Schools and get kids to come over and do community service, preparing for the fish fry dinners and cleaning up after. The ones who are there all six months get a $1000 scholarship. You never know how many will show up,” he continued.

There is also a Patriot Pin awarded to students in grades 4-8. They have a different veteran’s theme to write an essay on. There are 19 posts in District Twelve and the contest is held every year. The first place winner receives the pin.
“We also work with the American Legion,” Brockett added, “and hold a memorial service at the Veterans’ Park in downtown Atlanta. We replace the American flag and the POW flag each year for Memorial Day. There will be a singer and special speaker there Saturday, May 24.”