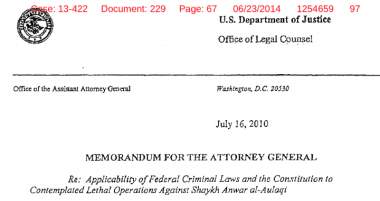 The memo justifying the president’s denial of due process to Americans whom he has ordered assassinated by drone was finally released.

In April, a federal appeals court in New York ordered the Obama administration to release at least part of a Department of Justice memo that sets out the president’s purported legal justification for his order to kill Anwar al-Awlaki, an American citizen.

Awlaki was targeted by the president and later assassinated by a drone strike in 2011 while he lived in Yemen.

The New York Times reported that the three-judge panel “unanimously” reversed a lower court decision, insisting that the federal government forfeited its secrecy defense by making “numerous public statements” explaining why it is legal for the president to order Americans be killed.

“Whatever protection the legal analysis might once have had, has been lost by virtue of public statements of public officials at the highest levels and official disclosure of the D.O.J. White Paper,” Judge Jon O. Newman wrote for the panel of the U.S. Court of Appeals for the Second Circuit, as quoted in the Times article.

With the publication Monday morning of the Justice Department memo, one would imagine that the world would finally appreciate the Obama administration’s justification for killing Americans by remote control. The reality, however, is that, as one commentator wrote, “the short version can be boiled down to four letters: AUMF.”

The Authorization of the Use of Military Force (AUMF) was passed immediately after the terrorist attacks of September 11, 2001 and represents perhaps the largest single de facto repeal of rights protected by the Constitution since that document was ratified in 1789.

Techdirt accurately summed up the immeasurable effect on liberty:

This [the AUMF] kicked off America’s “War on Terror,” a slippery slope “battlefield” that has been used to justify everything from domestic surveillance by the NSA to the purchase of cell phone tower spoofers and discarded military vehicles by local police departments.

Additional rationale for the usurpation of the authority to kill Americans without the slightest, even perfunctory nod toward civil liberties was published in a Justice Department “White Paper” released last year.

In commenting on the White Paper, White House Press Secretary Jay Carney used those words to describe the targeted assassination of American citizens overseas. In other words, those marked for death by drone are those believed by the president to be collaborating (in a notably undefined manner) with “al-Qaeda and its associated forces”; they have no rights and can be killed at will.

In a footnote, the Justice Department explained that the “laws of war” will be used to determine whether a group is a “co-belligerent” with al-Qaeda. That is the sum of the guidance and notice given to those Americans residing overseas who might unknowingly be targets for the next Hellfire missile.

As additionally put forth in the White Paper, “the condition that an operational leader present an ‘imminent’ threat of violent attack against the United States does not require the United States to have clear evidence that a specific attack on U.S. persons and interests will take place in the immediate future.”

In other words, anyone targeted by the federal government for assassination would be presumed to pose an “imminent threat of violent attack against the United States.” If, according to such reasoning, such imminence was not indicated by the suspected “terrorist,” then the president would not be justified in ordering the drone strike.

The American Civil Liberties Union (ACLU) is one of the organizations, along with the New York Times, that used the courts to force the current administration to release the drone memo.

In a blog post examining the recently released memo, the ACLU points out that rather than define “imminent,” the authors of the document simply repeat that word in another context. As the ACLU explains:

But rather than give further explanation and clarity to that extraordinary and novel reading of “imminence,” the newly released memo — at least as presently redacted — fails to address that requirement in any detail whatsoever.

The memo, signed by David Barron, then-acting chief of the OLC [Office of Legal Counsel] (and now a newly confirmed First Circuit judge), tells us that “[h]igh-level government officials” determined that al-Aulaqi constituted an “imminent” threat to the United States. But the memo does not explain how the government interprets that requirement, nor does the memo explain the evidentiary standard the officials must meet in order to satisfy it.

This standard was repeated in 2013 when CIA chief John Brennan said that President Obama does not “view [his] authority to use military force against al-Qa’ida and associated forces as being limited to ‘hot’ battlefields like Afghanistan.” There seems to be no one with authority to order drone strikes who would hesitate to use these aircraft to track and kill an American inside the United States if “an informed, high-level official of the U.S. government” considered the threat imminent.

Again, no word of what that means.

Another inexcusable omission from this inscrutable memo that was pointed out by the ACLU is its failure to set out guidelines for how these anonymous government officials decide who is and is not a candidate for capture rather than summary execution.

The newly released memo adds nothing of substance to that analysis. Importantly, though, the new memo does seem to indicate that its authorization for the targeted killing of al-Aulaqi was intended to be indefinite in duration, requiring only that the CIA and DOD continue to evaluate (without returning to the OLC) “whether changed circumstances” would make capture more feasible.

The subject of “capture feasibility” brings up the unanswered and unconscionable case of the murder of Anwar al-Awlaki’s son.

As he sat enjoying a roadside picnic in Yemen with a few second cousins and their friends — most of whom the young Colorado native had never met before that day — the teenager and all his companions were killed by two Hellfire missiles fired from a Predator drone.

The finger that pressed the button launching the lethal ordnance was American, and so was 16-year-old Abdulrahman al-Awlaki, the target of the strike and son of the suspected Svengali of militant Islam.

Abdulrahman al-Awlaki was killed in October 2011, and to date the Obama administration has never informed the country of any wrongdoing by this teenager, other than being related to a man (his father) who posted on the Internet anti-American videos that allegedly influenced others to commit crimes. A government-sanctioned assassination of such an individual is repugnant to all those who cherish life, liberty, and the due process that protects them.

An additional denial of due process came from the fact that no known attempt was ever made to capture this young man and take him into U.S. custody. Of course, that could be because he might actually have ended up in a court of law if he had been apprehended; and President Obama, a former lawyer, knows that trials can be long, messy, and unpredictable. It is much quicker and cleaner just to launch a missile and kill someone without going through the hassle of due process.

Should President Obama suggest that alleged evildoers cannot be apprehended, he should be reminded that “public enemy number one” Osama bin Laden was reportedly tracked and overtaken by a U.S. special operations team. Why could other less high-value targets not be similarly found by the military? Although bin Laden was reportedly killed in the raid, there is every reason to believe that a team skilled in this type of operation could have captured him alive if those had been the orders they were following.

Once in the custody of the United States, these suspects could be brought to stand trial for their alleged crimes. This would preserve, protect, and defend the fundamental concept of due process, one of the pillars of liberty upon which our Constitution is built.

Finally, the memo’s authors admit that there is no law authorizing the federal government to use deadly force against an American citizen at home or abroad. Notwithstanding, the Justice Department searches among the penumbras of congressional acts to find some supposed shade under which it can obscure the otherwise very obvious lack of genuine justification for the many murders this administration has ordered. Consider this rambling, irrelevant quote, for example:

To close the “loophole under Federal Law which permits persons who murder Americans in certain foreign countries to go punished [sic],” id, the Thurmond bill would have added a new section to title 18 providing that “[w]hoever kills or attempts to kill a national of the United States while such national is outside the United States but within the jurisdiction of another country shall be punished as provided under sections 1111, 1112, and 1113 of this title.” S. 861, 102d Con g. (1991) (incorporated in S. I 241, 102d Con g. §§ 3201 -03 (1991 )). The proposal also contained a separate provision amending the procedures for extradition “to provide the executive branch with the necessary authority, in the absence of an extradition treaty, to surrender to foreign governments those who commit violent crimes against U.S. nationals.”

As most Americans have not read the federal statutes cited in that paragraph of the memo, it is critical to report that summary execution by order of the government in violation of the due process mandates of the Constitution is not one of the punishments “provided under sections 1111, 1112, and 1113” of that law.

Of all the things left out of the memo, the one thing that comes through loud and clear is that anyone slated for White House-approved assassination is not allowed any rights — neither the due process rights given to those accused of crimes nor the rights of fair treatment given to enemies captured on the battlefield.

President Obama (and to a lesser degree his predecessor) has assumed all power over life and death and created ex nihilo a new category of individual — one deprived of all rights altogether.

The complete memo (if any document so redacted can be called “complete”) is available here.