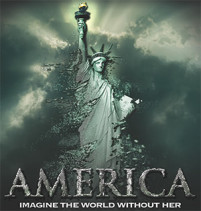 By  Bob Adelmann.
Originally appeared in The New American.
Used with express permission.

Dinesh D’Souza’s movie America: Imagine the World Without Her, co-produced and directed by John Sullivan and Gerald Molen, is based on his book with the same title and, like his previous offering, 2016: Obama’s America, is filled with nuggets of pure gold. However, just like his previous effort, it takes some effort to mine them and to separate them from the iron pyrite — fools’ gold — that often misleads and distracts the reader and viewer.

His book was released in early June and its initial popularity was unintentionally enhanced by Costco’s decision to pull the book from its stores followed by its awkward reversal to restore it to those same stores. D’Souza’s first film was the second-highest grossing political documentary of all time, while his present effort, released over Independence Day weekend, is already in seventh place, and climbing.

His distractions begin with his title. At no time in either his book or his movie does he answer the question of how the world would look without America’s influence. His first chapter is inaccurately titled as well: Suicide of a Nation. A suicide is self-inflicted, a deliberate purposeful effort to end one’s life. This title assumes that the average American is deliberately immolating his country by ignoring his responsibility as an informed voter in a constitutional republic.

D’Souza quickly corrects that initial idea, however, by focusing his attention on both the myths and the machinations of the disciples of destruction who are deliberately weakening the country by deceiving those voters. D’Souza might have titled his book America: Imagine a World Without Saul Alinsky and Howard Zinn, but that probably wouldn’t have garnered the audience or the coveted A+ rating it received from CinemaScope.

There are other difficulties that need to be exposed before this review can begin in earnest. Underlying D’Souza’s work is the assumption that Progressives want to punish America for its alleged theft: for its stealing of land from Mexico and Native Americans, for its eternal meddling in the Middle East to secure its oil, for its co-opting of the labor from its slaves in the 19th century, for its looting of resources from poor countries around the world. At no time, however, does D’Souza acknowledge the real purpose behind efforts to bring down America’s standard of living: to comfortably submerge the United States into the New World Order. There is no mention of the influence of foundations such as Ford, Carnegie, or Rockefeller. The world-government-promoting Council on Foreign Relations garners not a single reference in either the book or the movie. Thus, the “punishment” meme is a distraction away from the Progressives’ real intentions.

D’Souza repeats the myth that the Civil War was fought primarily to end slavery, and that Obama absorbed most of his colonialist-oppressive worldview from his father, when instead it came from hard-core communist Frank Marshall Davis. D’Souza claims that America is the “first country in history to be based on invention and trade” without any explanation as to why. He fails to explain the vital and fundamental roles the rule of law, enforcement of contracts, private property, and especially that of a limited government that allowed people to write their own ticket to their futures.

That being said, there is much useful for those involved in the freedom fight, including responses to claims made by Progressives that America is guilty of massive theft and needs to be punished. Early on he makes clear his intentions and purposes:

I intend to turn the progressive critique on its head. [Progressives] are not on the side of the ordinary citizen, because their policies lead to stagnation, impoverishment, indebtedness, and decline — all in evidence today.

It is progressives who rely on government seizure and bureaucratic conquest to achieve their goals and increase their power….

I intend to blow the whistle on these people, starting with Obama and continuing with Hillary Clinton and the whole progressive menagerie.

For instance, he rebuts the claims that America stole vast territory from native Americans without remuneration or guilt:

The Indians have gotten a bad deal. At the same time, we should be clear about what the alternatives are.… You say, “Give us back the Black Hills,” You point out that there is uranium and other minerals in those hills, and now that land is worth a fortune. Once again, no Indian tribe knew how to mine uranium and no Indian tribe knew what to do with uranium if they had it.

Other Americans have added value to the Black Hills by figuring out how to tap its resources, and now the Indians want the land back so they can take advantage of what others have figured out how to do.

After the [Mexican-American War ended in 1848], the United States immediately recognized as valid the property rights of Mexicans who were now part of U.S. territory. The change was not in any individual’s land ownership but in the fact that people who were once Mexicans now became Americans.

While progressives deplore American aggression … what we do know is that the vast majority of Mexicans who ended up on the American side of the border, following the Mexican War, never attempted to return to Mexico. And neither have their descendants.

His response on the big screen is even more convincing, showing that following the war the United States essentially owned all of Mexico, but gave half of it back. It also paid $15 million to the government of Mexico and assumed some $3 million of debt that government owed to American citizens. So much for colonialism, according to D’Souza.

As far as slavery is concerned, D’Souza was equally candid:

Did America owe something to the slaves whose labor had been stolen? … That debt … is best discharged through memory, because the slaves are dead and their descendants are better off as a consequence of their ancestors being hauled from Africa to America.

He enlists the help of Muhammad Ali to make his point. As D’Souza noted in both his book and movie, following one of his most famous fights in the 1970s held in Zaire, Ali was asked: “Champ, what did you think of Africa?” Said Ali: “Thank God my granddaddy got on that boat!”

D’Souza also makes a compelling point by bringing to light some history that Progressives ignore: that there were black slave owners oppressing their slaves in addition to white owners.

He successfully enlists the help in both his book and the film of Alexis de Tocqueville, who highlighted his astonishment as he observed the American experiment in person in the early 1800s. He noted that people considered themselves equal to everyone else, that it was a voluntary society where people helped other people, and no one ran to the government for assistance. De Tocqueville considered the Christian religion as foundational to political freedom while noting that slavery degrades the work ethic: It makes slave owners lazy, as well as the slaves, as neither has the incentive to engage in work. 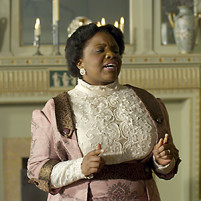 Another of D’Souza’s nuggets is his revelation that the first female millionaire in the United States was black: Sarah Breedlove, otherwise known as Madam C. J. Walker, the founder of Madam C. J. Walker Manufacturing Company, a maker of beauty and hair products for black women. In a lengthy clip, D’Souza had a black actress play the part of Breedlove in encouraging other black women to get involved in her company. It was something right out of an Amway recruiting presentation! Over and over again, Breedlove, born a slave but emancipated in 1865, reiterated the American promise: Given the opportunity, anyone in America can make their own future.

D’Souza spent the balance of the 100-minute long film exposing two of the prime movers behind the Progressive lies, Howard Zinn and Saul Alinsky. Zinn, a hard-core communist, authored A Peoples’ History of the United States which has sold more than two million copies and is required reading at colleges across the land. Zinn described his goal in writing it elsewhere as “not a revolution in the classical sense of a seizure of power, but rather from people beginning to take power from within the institutions.”

D’Souza outed Saul Alinsky in two riveting revelations. The first of these was Alinsky’s devotion to Lucifer as the first radical, dedicating his book Rules for Radicals to him:

Lest we forget at least an over-the-shoulder acknowledgment to the very first radical: from all our legends, mythology, and history (and who is to know where mythology leaves off and history begins — or which is which), the first radical known to man who rebelled against the establishment and did it so effectively that he at least won his own kingdom — Lucifer

The second was D’Souza’s revelation that Alinsky was mentored in his youth by Frank Nitti, best known as Al Capone’s “enforcer” and later the front man for the Chicago Outfit following Capone’s incarceration. Alinsky learned firsthand from Nitti just how extortion worked thanks to Nitti’s vast experience in prostitution, gambling, control of labor unions, and blackmailing of the Hollywood film industry.

D’Souza traced the links in his film from Zinn and Alinsky to Obama and Hillary Clinton. Unfortunately the flow charts briefly shown on the screen weren’t reproduced in his book, but his intention is clear: Obama is a disciple of Alinsky who was a disciple of Nitti, all of whom are disciples of the Great Deceiver Himself.

For those not involved in the freedom fight, the book and the movie on which it is based might be a bit much to digest in one sitting. Happily, evidence and proof is available not only in the copious notes provided by D’Souza for each chapter, but also from The John Birch Society (jbs.org).

In this reviewer’s opinion D’Souza has created a good work, despite its flaws, and will help those long involved in that fight with new insights, new revelations, and new responses to old tired charges that America was built on theft.

A graduate of Cornell University and a former investment advisor, Bob is a regular contributor to The New American magazine and blogs frequently at www.LightFromTheRight.com, primarily on economics and politics. He can be reached atbadelmann@thenewamerican.com.

0 thoughts on “Review: America: Imagine a World Without Her (book and film)”