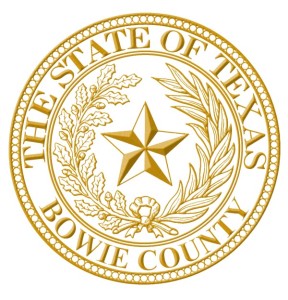 In Bowie County Commissioners Court last Monday, July 28, it was revealed that the county unexpectedly has over $700,000 available to cover payroll, but three of the Commissioners chose to leave the cuts in place. In addition to many jobs being lost, the county courthouse no longer has an armed deputy at the public entrance.

Some background… Bowie County was reimbursed by FEMA (Federal Emergency Management Agency) for expenses incurred in the late 90s and the early 2000s, and it was recently discovered that the fund, which had been considered restricted, should have been deposited into the general fund. According to the county’s outside auditor, the fund should be considered cash, and spent as the Court sees fit.

Recently, Commissioner Sammy Stone made a motion that all county departments cut payroll by 15%. All four commissioners voted to approve the cut; Judge Sterling Lacy voted against it. On the 28th, Commissioner Mike Carter said he didn’t like the cut, but thought it was necessary. However, after finding the county has an “extra” $700,000+ immediately available, made a motion that the cuts be rescinded. He said, “We’re putting aside money for a rainy day when it’s pouring down outside.”

County Auditor William Tye, who was hired after the fund was established, and had always assumed it was a restricted fund, said that the money could be spent at the Court’s discretion.

Carter said, “I just don’t see why we’re protecting money, why we don’t use it…. In business you use everything you have at your disposal to make it through the year.  We have a new year coming up… it would be nice to carry some [money] over, but let’s don’t put money aside if we have it available and make our county employees suffer when it’s not necessary.”

After a few minutes of discussion about whether other funds were mistakenly considered restricted, Carter said, “Let’s don’t make people suffer when we’ve got the money, and don’t have to.” The comment was met with applause from the spectators.

Commissioner Kelly Blackburn began by questioning how the fund could be replaced, then a few minutes later said the fund should reimburse the precincts that originally spent the money, but then added that he didn’t think the outside auditor’s opinion that the fund was available as cash was authoritative.

Commissioner Carter laughed and restated that it was a reimbursement, and that all FEMA guidelines had been met. Carter said, “This was never restricted money.”

Judge Lacy pointed out that the county had recently borrowed $5 million to make sure the county could meet it’s budget through September 30, the end of the fiscal year, including payroll – and then cut salaries anyway.

After a little more discussion, Commissioner Carter made the motion to rescind the payroll cuts. Judge Lacy seconded the motion.

County Auditor William Tye weighed in on the side of salary cuts – “If you’re not making the cuts, you’re not reducing expenses, and I think that’s what Commissioners Court originally agreed to do, reduce expenses.”

Commissioner Tom Whitten reminded the Court that the Financial Advisory Committee recommended immediate cuts, and asked Judge Lacy if he was aware the fund balance could become negative in about 6 weeks. Commissioner Carter replied, “It’s already negative. That’s why we borrowed $5 million dollars.”

Commissioner Whitten asked if there was a plan to replenish the fund, and it seemed he began to read from prepared remarks, asking, “Did you honestly think removing $500,000 from an already tight budget, from the rollback election, would not have ramifications to our employees?”

Judge Lacy again pointed out that the county had borrowed $5 million dollars, an amount calculated by the Auditor as sufficient to cover expenses for the remainder of the fiscal year, including payroll, with $400,000 left over.

Commissioner Stone retorted, “Did we cut expenses? No, we borrowed $5 million. This $5 million has got to come off the top, come January. What are we going to do with that?”

Commissioner Carter corrected him, saying, “No, it doesn’t. It’s going to be taxed on the I&S [Interest and Sinking] side.” Stone interrupted him, “It’s still got to be repaid, it’s money that’s got to come out of our expenses…” Carter explained to him that Bowie County citizens will be taxed a separate amount to completely retire the $5 million dollar debt, in addition to whatever taxes are levied to pay for Maintenance and Operations.

(It has been noted that county employees are some of the hardest hit by the Court’s recent actions – not only are they among those taxed to pay back the $5 million, some of them have had 15% pay cuts, and others have completely lost their jobs.)

Stone later said that the payroll cuts amounted to $487,000 over the next fiscal year, far short of the $2 million dollars in total spending cuts recommended by the Financial Advisory Committee.

The FAC made public statements warning the Court about “accounting gimmicks designed by non-accountants in an effort to avoid spending cuts,” that these aren’t “new” funds, and that spending them won’t help the current budget deficit.

However, if the funds had earlier been considered unavailable and are now available, it would certainly seem that would, in fact, affect the budgets. Obviously, if Whitten’s example of $500,000 being removed from the general fund (by the tax rollback) would cause payroll problems, then adding $720,000 to the general fund would solve them.

Commissioner Carter and Judge Lacy voted to rescind the cuts. Commissioners Stone, Whitten, and Blackburn voted to leave them in place.

0 thoughts on “County ‘Finds’ Enough Money to Rescind Payroll Cuts, but Leaves Them in Place (Video)”