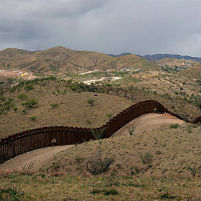 By Warren Mass
Originally appeared in The New American.
Used with express permission.

An intelligence report compiled by the U.S. Customs and Border Protection agency (CBP) reveals that large numbers of immigrants originating beyond Latin America are illegally crossing the southern U.S. border.

The report, which was leaked to Breitbart Texas by a source within the CBP who spoke on the condition of anonymity, records the numbers of individuals being caught or turning themselves in to Border Patrol agents from 2010 through July 2014. The illegal immigrants originated from more than 75 different countries.

Although the current spotlight on the illegal immigration front is on the large number of unaccompanied children from Central America who continually cross the border into South Texas, the CBP report indicates that the problem is more widespread. Among the overseas destinations listed in the report are Syria and Albania, from which smugglers send immigrants first to Central America and then northward across the U.S. border. Among other nations from which immigrants were caught entering the United States illegally:

Since it is not possible to know how many people crossing our border illegally escape detection, the above figures suggest that many more people from across the globe have crossed our southern border, including some with terrorist connections or originating in nations where the current Ebola virus outbreak has occurred. Breitbart reports that the CBP data reveals that at least 71 individuals from the three nations affected by the Ebola outbreak have either turned themselves in or have been caught attempting to illegally enter the United States between January and July of this year.

While the unaccompanied children from Central America who cross our border pose a special problem for immigration authorities (because deporting them involves special logistical difficulties), there are also many children from Mexico crossing our border illegally. A new Pew Research Center analysis of Mexican government data obtained from the Mexican Ministry of Foreign Affairs released on August 4 found:

The number of apprehensions of Mexican child migrants rivals those of [Honduras, Guatemala, and El Salvador] but many of those caught are ones who tried to cross multiple times — meaning that the total number of child migrants from Mexico is lower compared with the Central American nations.

The Pew Research data found that out of the more than 11,000 apprehensions of unaccompanied Mexican minors during the current fiscal year (October 1 through May 31), only 2,700 children (24 percent of all the apprehensions) reported being apprehended for the first time.

The article accompanying the Pew report offers an explanation for the large numbers of Mexican children who have illegally crossed into the United States multiple times:

Aside from close geographic location to the U.S. border, it’s easier for Mexicans than Central Americans to attempt multiple crossings into the U.S. because children from Mexico and Canada don’t receive the same protections as those from other countries under a 2008 human trafficking law. The law requires Central American children to be processed by the Department of Health and Human Services’ Office of Refugee Resettlement and placed in housing, preferably with a family member, while their immigration cases are processed in U.S. immigration court.

As we have reported previously, the William Wilberforce Trafficking Victims Protection Reauthorization Act of 2008, signed into law by President George W. Bush, makes it nearly impossible to deport unaccompanied minors to Central America without first letting them appear before an immigration judge. Because of the current backlog, the wait for such court appearances can be very lengthy, during which time the immigrant minors are released from custody.

In the case of unaccompanied minors from Mexico, immigration authorities can use discretion in evaluating whether the children are victims of human trafficking. If officials suspect such treatment, the children are treated similarly to those from Central America. Since the latter amount to only five percent of those detained, the remaining 95 percent are returned to the border within 72 hours and handed over to Mexican consulate officials.

“That’s the real issue here, and one that all too often gets deflected by the conversation about unaccompanied minor children,” Perry said Sunday in an interview with CNN’s Candy Crowley.

Perry asserted that terrorists are using a porous southern border to enter the United States. CNN reported that Perry’s statement was backed up by Rep. Mike Rogers (R-Mich.), chairman of the House Intelligence Committee, who said on the program that his committee “noticed a very dangerous trend a few years ago when the Iranian Quds force, their external terrorist group supported by the country of Iran, was planning an operation to use the southern border to infiltrate people into the United States to kill the Saudi ambassador.”

So a porous southern border is now on the advertising list for those who want to do nefarious activities entering the United States, everything from criminal activity — gangs, we’ve seen that surely — human trafficking, and now you’re seeing these groups who we believe are connected in some way with terrorist organizations at least having the understanding, and now you’re seeing the apprehensions behind it.

It doesn’t take a rocket scientist to figure out that they’ve figured out it is a weakness in our national security.

As the CBP report indicates, “they” can include people from almost any nation in the world.