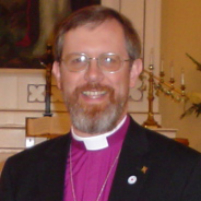 Rev. Heiser is the Bishop of the Evangelical Lutheran Diocese of North America (ELDoNA) and Pastor of Salem Lutheran Church (Malone, TX). He also serves as Dean of Missions for the Augustana Ministerium and as a member both of the Board of Directors and Steering Committee of The Mars Society. Rev. Heiser earned his BA in Political Science at George Washington University (Washington, DC) and his M.Div. and STM from Concordia Theological Seminary (Fort Wayne, IN).

Prior to entering the ministry, Rev. Heiser served as a Research Associate of the National Center for Public Policy Research (Washington, DC) and as a Media Analyst for the Media Research Center (Alexandria, VA). He is the author of more than 400 articles which have appeared at TheNewAmerican.com (and here). His writings have also appeared in the print edition of The New American.

In his 1995 book, The Perestroika Deception, former KGB officer Anatoliy Golitsyn set forth his analysis of Mikhail Gorbachev’s Perestroika “reforms” as a tactic by the KGB and Communist Party leadership in its long war against the West. Now, Neo-Eurasianism is the new ideological force behind a new empire — the Eurasian Union — which would extend from “Dublin to Vladivostok.” Neo-Eurasianism was formulated by Aleksandr Dugin, a Moscow academic who was chosen by the Putin regime in 2001 to head the Evraziia (Eurasia) movement.

We will meet at:

Cost:
$10 for the program. Lunch is additional – whatever you choose to order. Copeland’s lunch menu features items for $9.95 and under.

We look forward to seeing you there!

Share this article, or use the event page on Facebook to invite your friends. We look forward to seeing you there!

0 thoughts on “Presentation: The Soviets Didn’t Give Up – They Changed Their Names”