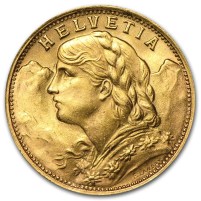 The Swiss connection to gold is unparalleled in the world today. Not only does it have by far the biggest hoard in relation to the population (approximately five ounces per inhabitant to the worldwide average of less than one ounce). On top of this, the Swiss Franc has over many years received the backing any self-respecting currency should enjoy.

In keeping with this tradition, several “Volksinitiative“ (so typical for Swiss direct democracy) have made good progress in reaching or almost reaching the voting stage. Unfortunately, politics in cooperation with the mainstream media had managed to scupper prior efforts. However, on November 30 an initiative will come to the ballot that could be of the utmost importance to the adherents of the Gold Standard.

The Swiss “Gold Initiative“ unashamedly takes the stance of the Gold Standard by demanding a largely covered currency. Yes, you have read correctly! They demand a currency largely covered by gold. The details are clearly defined:

On their website, www.gold-initiative.ch, the Initiative highlights the mistakes of the recent past by asking their readers:

Gold insiders can imagine how this initiative has been fought, maligned and bad-mouthed by politics, the national bank and the mainstream media for pointing out the crimes of the SNB. “The gold reserves could neither have been used for financing trade deficits nor for interventions on the currency markets since they could not have been sold.” said the Bundesrat. The Swiss national bank defends their policies with the words: “Accepting the initiative would significantly reduce the SNB’s room for manoeuvre.”

Fortunately, the Gold Initiative has found some backers amongst politicians: Bundesrat Lukas Reimann supports the initiative despite the strong headwinds and spoke candidly in the Bundesrat:

The Gold Initiative makes sure that new money cannot be printed willy-nilly. It ensures that the balance sheet includes assets of real value and not just paper money. Public debt is a way of expropriation and gold stands in the way of these devious schemes. It is the guardian of property rights. Once you have understood this, it is easy to see why the proponents of a planned economy are so hostile to the Gold Standard and why one should vote in favour.

Wise and mature words from Swiss politics, that has of late sadly lost some of their reason, vision and traditional closeness to the people due to EU pressure.

November 30 is a day of hope for the backers of a covered currency system. Let us hope that the good common sense of the Swiss has not been numbed by the propaganda of media and politics.