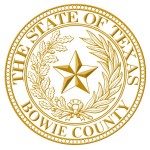 There have been ongoing complaints for a few weeks about Judge Lacy giving his staff raises, and hiring people for the supposedly unnecessary position of courthouse receptionist/switchboard operator.

I asked him for an explanation of both issues. A little more detail follows the video.

For quite a while, Judge John Carson, the Justice of the Peace for Precinct 5 in Maud TX, was Bowie County’s Emergency Management Coordinator, and Cindy White served as the Deputy Coordinator.

When Judge Carson passed away recently, Cindy White was appointed by Judge Lacy as the new coordinator, leaving the deputy position unfilled. The assumption was that she could handle the job by herself, and this proved correct. Not long ago, Ms. White took a job with a local school district, leaving the position open.

Judge Lacy then appointed one of his assistants, Paula Williams, to that role – with some changes.

First, he made the position of Emergency Management Coordinator part-time. Ms. Williams now splits her duties between his office and that of Emergency Management Coordinator. Lacy then appointed two field coordinators, one for the east end of the county, one for the west. Each holds full-time jobs elsewhere, and are paid a small weekly sum for their duties. Ms. Williams handles all the in-office duties, and the two field coordinators are responsible for out-of-office duties.

When Commissioners Court gave the order to cut payroll in each office by 15% last summer, some department heads reduced everyone’s salary by 15%, and others reduced the number of employees to meet that goal, leaving the remaining salaries intact. A couple of offices elected to share employees with other offices to meet the goal.

Initially, Judge Lacy’s staff each took the 15% cut. The recent shifting of duties between his office and Emergency Management (which is under his office) allowed for not only an overall savings for both offices as he describes in the video, but allowed his staff, including Ms. Williams, to have their salaries restored to the pre-15%-cut levels.

Kathy Hicks was the courthouse receptionist/switchboard operator until she left recently to become Commissioner Mike Carter’s secretary. Judge Lacy recently filled the position by hiring two new part-time employees, each of whom works half a day. As part-time employees, they aren’t eligible for benefits, resulting in the savings for that position.

0 thoughts on “Judge Lacy Responds to ‘Raises’ and Receptionist Complaints”