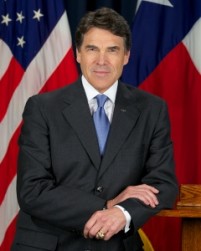 Gov. Rick Perry today highlighted the ongoing need for the state’s border security operations, and called on Congress to quickly pass a bill to provide the resources necessary to secure our southern border. In the absence of adequate federal resources, the governor reiterated Texas’ commitment to using all available tools to enforce the law, and announced an executive order directing state agencies to use E-Verify to check the employment eligibility of current and prospective employees.

“Texas’ increased law enforcement presence in the border region is all the more necessary as the federal government continues to ignore the very real issue of border security in favor of political posturing on immigration,” Gov. Perry said. “It’s clear now more than ever that Congress must finally pass a bill that dedicates the necessary resources to securing our border, once and for all. Without border security, immigration reform is a fruitless exercise.”

E-Verify is an Internet-based system that allows employers to determine the eligibility of their employees to work in the U.S. The governor noted improvements to E-Verify that have streamlined the system and improved its accuracy. While 17 state agencies already use E-Verify, the governor’s executive order expands its use to all state agencies under control of the Governor’s Office and all those with whom they enter into contracts for services to determine the work eligibility of employees and subcontractors.

Additionally, the governor noted that following the dramatic influx of unaccompanied minors that illegally crossed into Texas over the summer, Texas has updated its contingency plan for dealing with potential mass migration scenarios. The governor noted that President Obama’s announcement of executive action granting amnesty to millions in the U.S. illegally makes a mass migration scenario more likely than ever before.

Gov. Perry was joined at the press conference by Texas Department of Public Safety Director Steve McCraw, who discussed the significant impacts of the ongoing, state-led surge operation – dubbed Operation Strong Safety – in the Rio Grande Valley. Since the beginning of the operation in June, weekly apprehensions of illegal aliens by federal authorities have dropped dramatically in the area of operation – with most recent figures showing an approximately 73 percent decrease.