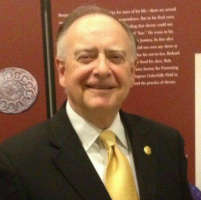 Texas lawmaker Dan Flynn has introduced legislation that would invalidate within the sovereign borders of his state every act of the federal government that exceeds its constitutionally derived authority.

the power to take any legislative, executive, or judicial action that violates the constitution, specifically including those actions that unconstitutionally undermine, diminish, or disregard the balance of powers between the states and the federal government established by the constitution.

Flynn goes on to cite chapter and verse of the Constitution and the principles of federalism in defense of his position that the state of Texas retains the power to refuse to carry out federal mandates that are not specifically authorized in the Constitution’s enumeration of federal powers.

Beyond his understanding of core concepts of federalism, Flynn is to be commended for the bold warning he included in his legislation:

This state and its people retain their sovereign power to regulate the affairs of this state, subject only to the limitations prescribed by the United States Constitution.

Nothing more needs to be said. Flynn’s bill, officially titled the Texas Balance of Powers Act, is a full-throated defiance of federal tyranny and attempts to subjugate the states into nothing more that administrative sub-units of the plutocracy on the Potomac.

Representative Flynn seems to appreciate the fact that states are not left defenseless in the battle to fight the cancer of consolidation. There is a remedy — a “rightful remedy” — that can immediately retrench the federal government’s constant overreaching. This antidote can stop the poison of all unconstitutional federal acts and executive orders at the state borders and prevent them from working on the people.

The remedy for federal tyranny is nullification, and applying it liberally will leave our states and our nation healthier and happier.

The bill creates a Joint Legislative Committee on Nullification composed of key officers in the Texas state government that will be charged with “review[ing] any federal action to determine whether the action is an unconstitutional federal action.”

Texas — and her sister states — retain this right of refusal owing to their role as creators of the federal government.

The states created the federal government and reserve the right to resist the exercise by Congress of any powers not specifically granted to it by the states in the Constitution.

The documents sent by the states to Congress announcing their ratification of the Constitution provide additional evidence of the founding generation’s appreciation of the states’ and federal government’s respective roles as creator and creation. In nearly every one of these letters, the state legislature or ratifying convention delegation explicitly remind Congress that the consent of the states formed the federal government.

New Jersey expressed a similar understanding of the parties to the constitutional compact: “Whereas a convention of Delegates from the following States, vizt. New Hampshire, Massachusetts, Connecticut, New York, New Jersey, Pennsylvania, Delaware, Maryland, Virginia, North Carolina, South Carolina and Georgia, met at Philadelphia for the purpose of deliberating on, and forming a constitution for the United States of America.”

Georgia’s ratification notice letter also recorded the states’ role as creators of the new federal government: “Whereas the form of a Constitution for the Government of the United States of America, was, on the seventeenth day of September, one thousand seven hundred and eighty-seven, agreed upon and reported to Congress by the Deputies of the said United States convened in Philadelphia.”

And on, and on, and on. The ratifying conventions called throughout the 13 states understood that the delegates sent to Philadelphia in the summer of 1787 created a general government of limited power, retaining for themselves nearly the full panoply of powers they had exercised successfully for over a century.

If nullification is to be successfully deployed and defended, other states lawmakers must follow Dan Flynn’s example and remember that the Constitution is a creature of the states and that the federal government was given very few and very limited powers over objects of national importance.

As the Texas Balance of Powers Act makes clear, any act of Congress, the courts, or the president that exceeds that small scope is null, void, and of no legal effect. No exceptions. James Madison said it best in Federalist 45, “The powers delegated by the proposed Constitution to the federal government, are few and defined. Those which are to remain in the State governments are numerous and indefinite.”

There are those commentators, however, who insist that the Civil War settled the question of sovereignty and supremacy once and for all. They are wrong.

Think of it this way. Assume my neighbor and I disagree over the exact location of the boundary line between our properties. One day, while I’m out building a shed that my neighbor believes encroaches on his property, we start arguing, and the argument escalates to a full-fledged fist fight and I knock out my neighbor. Does that mean that the location of our mutual property line has been settled? Does the pummeling of my neighbor make my opinion of the location of that line the legal boundary?

Might, it seems, does not make right, neither in boundary disputes regarding land nor in similar conflicts over state sovereignty.

Nullification, as defined by Jefferson and Madison, and understood so well by Representative Flynn, is the most powerful weapon against the federal assault on state sovereignty and individual liberty. By applying the principles repeated in HB 98, states can simultaneously rebuild the walls of sovereignty once protected by the Constitution, in particular the Tenth Amendment, and drive the forces of federal consolidation back inside the constitutional cage meant to restrain them.

These bills included needed Second Amendment legislation, others to save taxpayer dollars with local water utility districts, assuring American law is practiced in American Courts, that district farmers and ranchers have the right to farm and ranch and sell their products without government interference, the free exercise of religion, and a law requiring students to take a semester on the U.S. Constitution prior to graduation from high school.