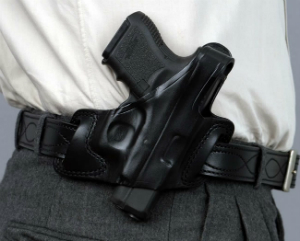 (OCT) is a pro-gun rights organization that is working tirelessly throughout the state to renew your gun rights in Texas back to full constitutional form.

I know some of you must be wondering what exactly I am talking about. After all, this is Texas, and we are known for being proud of our guns, but how free are we in Texas when it comes to our right to keep and bear arms?

Surprisingly, not very. While it is perfectly legal to openly carry a long gun (unconcealed) it is against the law to carry a handgun in this manner. (This is why OCT carries long guns, to protest against the ban on the open carry of handguns and to help condition people to feel comfortable around firearms.) It is legal to open carry a handgun in 44 states, 30 states require no license and 5 states allow open and concealed carry without a license, which is commonly referred to as “constitutional carry.”

If you wish to carry a handgun for protection (which is far more practical than a long gun) in Texas, you must obtain a license and you may only carry concealed. For this license you must pay the state $140, take a class required by the state which costs around $75 and teaches you mostly about state law and next to nothing about self defense. Then you have to schedule an appointment for another date to pay more money to have your fingerprints taken for an FBI background check, which could require you to drive 2-3 hours, depending on where you live, as the number of places that are allowed to take these fingerprints are limited. Finally, once all this is done and sent off you will be waiting about 6 months to receive your license. I feel sure all criminals go through this process before they carry </sarcasm>.

This system makes it next to impossible for people with full time jobs or those that cannot afford to spend an additional $250 to exercise their rights. Add to this that anyone convicted of or under investigation for anything over a Class C Misdemeanor – littering, owing back child support or a whole host of other petty, nonviolent crimes that should have no effect on ones right to self defense – will lose their license or become ineligible to obtain one. All of this and more is why OCT opposes having the government regulating our rights via licensing, as there is no end to how much they can regulate it once they are in control.

As for open carry itself, it has been a nonissue in the 44 states that already enjoy this freedom. There have been several studies on self defense instances in which firearms were used and it was found between 92% – 98% of all instances were stopped by the mere display of a firearm. Open carry gives you this advantage right out of the gate, concealed carry is so you can respond to an event that is already happening, open carry is about preventing it from happening in the first place.

I could make a case for concealed carry or open carry but I’m not writing this to promote open carry as being better than concealed or vice versa; both sides could argue the merits of both until they are blue in the face. My point is that free men and women should be able to defend themselves in the way they best see fit, whether that is with open carry, concealed carry or no carry at all, without the state telling them how they may do so.

If you have to pay the state for a permit, it is not a right, but a privilege. There is no reason – other than the state of Texas wanting $140 per person from the licensing – that Texas cannot be the 31st state to offer unlicensed open carry or the 6th state to get full constitutional carry.

Open Carry Texas will not give up until Texas is a constitutional carry state. We must not be content with the state regulating our rights in such a manner.

OCT got it’s start when Army Master Sgt. CJ Grisham was unlawfully arrested for openly carrying a rifle while on a hike with his son on a country road. This event prompted Grisham to become a gun rights activist and start the group. Two years later OCT has grown to around 30,000 members throughout the state. In that time we have had over 2,000 events with our long guns slung over our shoulders, the vast majority being in urban areas without a single incident as it pertains to firearms safety.

Any events held on private property are held with permission of the owner. Regardless of what the news sometimes reports we do not go around scaring people and I can say as an insider many of the stories that paint us in a negative light are either complete falsifications of the truth or the audio, video, story has been highly edited to work against us. I talk to several people every time we have an event and it is a positive reaction the overwhelmingly vast majority of the time. We carry signs, keep our hands off our firearms and carry flags to ensure that we look like a group that is out there for a cause and to look as nonaggressive as possible.

We have contacted our representatives to garner support for open carry and constitutional carry, we have worked with the National Association for Gun Rights to create a bill, found a sponsor and now have our own constitutional carry bill filed for the 2015 legislative session which is HB195.

Texas has never been so close to repealing it’s 140-year ban on handgun open carry. If you are interested in getting involved then come join us at OCT: Texarkana on Facebook or if you don’t do Facebook then go to OpenCarryTexas.org, and they will help you get in touch with your local chapter.