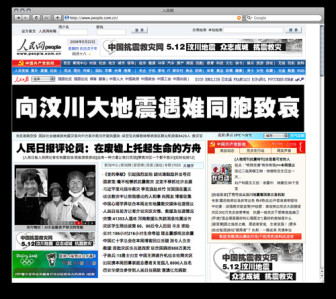 Chinese President Xi Jinping and his Internet censorship czar, Lu Wei, are learning that Princess Leia was right when she said in the movie Star Wars about extending increasing totalitarian political control, “The more you tighten your grip, the more star systems will slip through your fingers.”

When Wei visited Silicon Valley heavyweights last December, he noted that Facebook’s CEO, Mark Zuckerberg, had an anthology of President Xi’s speeches on his desk. Included in that book was a speech in which Xi laid out his vision of the Chinese Internet:

[We should] use Internet communication rules to advocate things wholesome and positive, and disseminate and put into practice the core socialist values….

[We should] properly handle timing, extent and efficiency to make our cyberspace wholesome and clean….

It is a long-term task to ensure that online public opinion is healthy and sound.

That speech is the justification for Wei, the head of the Propaganda Department of the Communist Party of China, to tighten his grip on the Internet, with results happening that line up with the famous statement in Star Wars.

Wei claims the right (and exerts the power) to block offensive websites, censor anti-government content, and track dissident users and put them in jail. He’s discovering that the tighter his grip, the more hackers are developing workarounds to defeat him.

]When the Chinese state cracked down on dissidents seeking the truth about the Tiananmen Square massacre as its 25th anniversary approached last summer, virtual private networks (VPNs) sprang up allowing those seekers to learn what had been withheld from them. It also allows movie enthusiasts to view Netflix offerings, even though Netflix blocks communications with Chinese computers. More than 20 million Chinese users enjoy Netflix through VPNs.

VPNs have become so popular that the primary ones became a target for Wei and his estimated two  million computer hackers in January, causing temporary outages at Astrill, StrongVPN, and Golden Frog. Within a few days they were back online, while other smaller ones, such as Psiphon, Lantern, and Tor, weren’t affected at all because they had developed “obfuscation” techniques that were several steps ahead of Wei’s people.

Wei’s “people” include some of America’s Internet titans, who have been helping by not only giving him favorable press but valuable advice and counsel. Wei’s helpers include Zuckerberg, Jeff Bezos (Amazon’s CEO), Apple’s Tim Cook, and eBay’s chief executive, John Donahoe. LinkedIn has already agreed to censor some of the content on its Chinese site, while Apple as agreed to host some of its data inside China, where Wei and his people can access it and make “suggestions” to Cook about anything that might appear inappropriate or threatening to the existence of the communist dictatorship. In fact, Apple just posted this help wanted ad to assist Wei with that task:

The role will be directly responsible for the management, handling and issuance of appropriate responses to requests from law enforcement authorities, public prosecutors and courts … throughout China. [Emphasis added.]

Such support of Wei’s efforts have already cost more than 48 Chinese bloggers their freedom, including Chinese journalist Shi Tao who was arrested by Chinese censors after Yahoo provided information about his account to the government. Shi spent eight years in a filthy prison camp for his crimes, while Yahoo’s founder, Jerry Yang, expressed his regrets, saying, “I did not like the outcome” and then calling Shi’s family to apologize. He admitted later that he would do it again, as a cost of doing business in China.

All of which serves to illustrate the commonality of purpose in cyberspace between totalitarians on one side and crony capitalists on the other. It’s a battlefield, according to Wei, and some of his troops come from Silicon Valley. Last August Wei explained:

The Internet has become the main battlefield in the struggle for public opinion. On this battlefield of the Internet, whether we can stand up and gain victory relates directly to our country’s ideological security and regime security.

On the other side are millions who decry the Chinese censors and their enablers. Bill Xia, a Chinese-born software engineer now living in North Carolina, and his company, Dynamic Internet Technology, have for years been waging cyberwar against the Chinese regime, using Freegate, a free software program that finds holes in the Chinese firewall, holes that allow Chinese internet users to gain undetected access to the banned websites. He sends millions of email messages into China for his customers such as Voice of America and the activist group Human Rights in China, providing them links to forbidden sites. It’s a constantly changing list of links as Wei’s people continue the game of cat and mouse.

He has a lot of help from those customers who inform him immediately when one of Wei’s cybersleuths start closing in. He’s already upgraded Freegate more than 20 times, but says “we’re gradually getting faster and faster” at keeping the software ahead of Wei’s cyberbullies.

Despite the fact that Wei has two million computer nerds tracking down cyber-dissidents, Xia has millions shutting the door on them. It’s a war that Wei, Xi, and his friends in Silicon Valley can’t win.

A graduate of an Ivy League school and a former investment advisor, Bob is a regular contributor to The New American magazine and blogs frequently at www.LightFromTheRight.com, primarily on economics and politics.