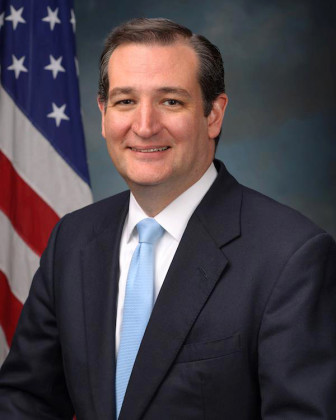 Not bothering with an “exploratory committee,” Senator Ted Cruz (R-Texas) has jumped with both feet into the 2016 presidential race.

Cruz openly identifies with the Tea Party, and has done so since before his upset victory in the Republican primary for the U.S. Senate in 2012, when he garnered big-name endorsements from then-Texas Congressman Ron Paul, Senator Rand Paul, former Senator Rick Santorum, and then-Senator Jim DeMint.

In his speech anouncing his candidacy Monday at Liberty University in Virginia, Cruz offered the students and faculty of the conservative Christian college some red meat:

Cruz’s law professor at Harvard, liberal Alan Dershowitz, has called his former student “off-the-charts” brilliant, and Cruz went on to clerk for Supreme Court Chief Justice William Rehnquist. He was educated in private Christian schools and spent much of his teen years as part of a group of students in the Free Market Education Foundation, who studied such libertarian-conservative icons as Milton Friedman, Friedrich Hayek, Frederic Bastiat, and Ludwig von Mises.

When Texas Governor George W. Bush was elected president in 2000, Cruz joined the administration in the Department of Justice. Despite this Bush connection (which understandably raises some eyebrows among conservatives who have suffered from this family for a generation now), Cruz later opposed the Bush administration, after he was no longer employed there. President Bush tried to force the state of Texas to honor a decision by the International Court of Justice (ICJ), in the case. The Bush administration supported the ICJ in an effort to reopen the cases of 51 Mexican nationals who had been convicted of murder, and were on death row in the Lone Star State. The ICJ argued, and Bush agreed, that Texas had failed to allow Mexican nationals proper access to the Mexican consulate, but Cruz, acting as a lawyer for Texas, defeated the Bush administration before the U.S. Supreme Court in a 6-3 decision. The Court held that the ICJ simply did not have any jurisdiction over U.S. domestic law.

Cruz also filed an amicus brief on behalf of attorneys general in 31 states in the Heller decision, which struck down the ban on handguns in the nation’s capital in violation of the Second Amendment.

In other issues, Cruz has taken strong conservative positions on social issues, tempered with respect for state sovereignty. He opposes same-sex marriage, and the legalization of marijuana, but believes both issues should be left to state discretion. He is also pro-life.

In international affairs, Cruz has said that he positions himself “somewhere in between” the non-interventionist views of Senator Rand Paul (who is considering a presidential bid himself) and the bellicose interventionist rhetoric of Senator John McCain. Non-interventionists can hope that a Cruz administration would be much closer to Senator Paul than Senator McCain, and in fact, Cruz did oppose American intervention into the Syrian civil war, arguing that the United States had no “dog in the fight.”

Cruz also authored a bill to prohibit the use of drones to kill American citizens inside the United States, and rose to support Rand Paul when the Kentucky senator staged his famous filibuster on that issue.

At other times, Cruz has not positioned himself near Paul in foreign affairs and the use of the military. On the contrary, he has even pointedly said that he disagrees with Paul. While Cruz achieved a solid 89 percent score on the “Freedom Index” of The New American magazine, he has demonstrated a penchant for intervention. On March 27, 2014, he voted for a bill to provide $150 million in direct aid for Ukraine. The bill would also provide for loan guarantees — meaning that should the Ukrainians not pay back the loan, which is likely, the American taxpayer would foot the bill.

Speaking to Stuart Varney on Fox News Insider, Judge Andrew Napolitano conceded that while he liked Cruz’s views toward the Constitution overall, he has some concern with his position on the use of American military forces overseas. “I think Ted Cruz would probably join all the other Republicans but Rand Paul with the idea that we should — to use Woodrow Wilson’s phrase — make the world safe for democracy,” Napolitano told Varney, lamenting that this will lead to “perpetual death and perpetual war.” Napolitano added that war should be a last resort to defend our nation, and should not be used “just because we don’t like what’s going on in other countries.”

The Texas senator can expect opposition from the GOP establishment, which will no doubt support former Governor Jeb Bush of Florida. For example, Greg Valliere, a political advisor to Wall Street firms, boldly predicted that Cruz could not carry more than a dozen states, should he actually win the Republican nomination. On the other hand, the establishment will most certainly approve of Cruz’s position of giving President Obama (or any other president) “fast track authority” on trade. Fast track authority certainly violates the spirit of the Constitution by transferring more power to the executive branch in the making of trade agreements with other nations. (See here and here for recent New American articles on these dangerous trade agreements.)

Cruz’s Cuban ancestry probably contributed to his capture of 40 percent of the Hispanic vote in the 2012 Texas senate contest.

A great concern for conservative constitutionalists is whether Cruz would follow the U.S. Constitution as president, or whether he would conduct himself as have several of our recent presidents, both Democrat and Republican, who have run roughshod over that precious document on a regular basis.

0 thoughts on “Would Ted Cruz Make a Good President?”