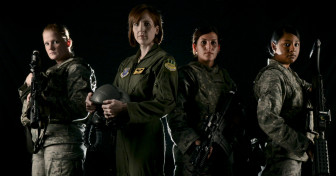 Memorial Day often brings to mind the great sacrifices of soldiers, sailors, airmen and marines and the wars they have fought in and this is certainly fitting and proper. What is not widely known is that women have also served and fought since the founding of this nation. Below are a just few facts you may not have known.

First in Combat
The first woman to serve in combat was Margaret Corbin who fought at the battle of Fort Washington on 16 November 1776. Mrs Corbin and her husband John crewed one of the two cannon held by the Americans. When John fell in battle, Margaret took his place and continued firing until she also was wounded. She is the first woman in the history of the nation to receive a pension for military service.

Medal of Honor & First POW
The first woman to win the Medal of Honor was Dr. Mary Walker. She served the Union Army as a surgeon during the Civil War. She was awarded the medal by President Johnson on the recommendations of Generals Sherman and Thomas. Dr Walker also holds the distinction of being the first US female POW. She was captured by Confederate forces on 10 April 1864 and imprisoned until she was released in a prisoner exchange on 12 August of that same year. It was not until WWII that women would again be captured and held as POWs.

First KIA
The first military woman killed in action was Jemima Warner who was serving as a battalion cook in Thompson’s Pennsylvania Rifle Battalion. She was killed on 11 December 1775 by an enemy bullet during the siege of Quebec. Mrs Warner had originally accompanied her husband on the campaign and stayed on as a cook after her husband died.

It is estimated that 359 servicewomen died during World War I and over 500 in the line of duty during World War II (16 from enemy fire). Seventeen military nurses died during the Korean War and eight service women died while serving in Vietnam (1 from enemy fire). Yet the list of casualties does not stop there, according to the Washington Post, 160 women have been killed in Iraq and Afghanistan as women continue to serve and defend our nation in both combat and support roles.

Kickin’ Butt
On 20 March 2005, Sgt. Leigh Hester’s squad came under ambush that resulted in a 25 minute firefight. When all was said and done Sgt. Hester became the first woman to receive the Silver Star for close in combat.

For more about women serving in combat see the article at http://nation.time.com/2013/01/28/american-amazons-hiding-in-plain-jane-sight/