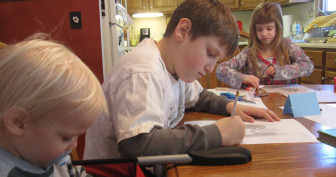 Homeschooling is on the rise. According to the U.S. Department of Education’s recently released Digest of Education Statistics, between 2003 and 2012, the number of homeschooled children in the United States is estimated to have grown by nearly 62 percent. Moreover, despite stereotypes to the contrary, most homeschooling families are headed by well-educated parents earning middle-class incomes.

Homeschooling is more prevalent in two-parent families (2.7 percent of children) than in one-parent families (0.9 percent). The families that homeschool the most are those with two parents but only one working, leaving the other available to oversee home education; 5.3 percent of children in such families are homeschooled. That percentage, after reaching a high of 7.5 percent in the department’s 2007 survey, has actually fallen slightly below its 2003 level of 5.6 percent. Most likely that is the result of the recession, which threw many out of work or into part-time jobs, forcing both parents to work to make ends meet. This is reflected in the fact that two-parent families with both parents working had 1.3 percent of their children educated at home in 2012, up from 1.1 percent in 2003, while one-parent families with a working parent were homeschooling just 0.7 percent of their kids in 2012 as opposed to 1.4 percent in 2003. Families with no parents working, meanwhile, went from homeschooling a negligible percentage of their children to teaching 1.8 percent of them at home over that same period.

Larger families are also more likely to homeschool than smaller families. As of 2012, 2.9 percent of children in families with three or more children were being homeschooled, while only 1.6 percent and 1.5 percent of kids in one- and two-child families, respectively, were getting their educations at home.

The survey also revealed that homeschooling is more common in small towns and rural areas than in cities and suburbs and that it is most prevalent among white families. Hispanic families, however, have tiptoed into the homeschooling waters in recent years; 0.6 percent of Hispanic children were home-educated in 2012.

Other surveys have suggested that there are even more homeschooled students than the Education Department believes. The National Home Education Research Institute (NHERI), for instance, estimates that there are about 2.2 million homeschooled students in the country and that roughly 15 percent of homeschooling families are non-white and non-Hispanic. An accurate count is almost impossible because some states don’t require homeschooled students to register with their local school districts, while others are so overbearing that parents try to keep their homeschooling a secret for fear of having their children taken from them or being subjected to intrusive interrogations and warrantless searches.

Why is homeschooling increasingly popular?

A quick glance at the headlines will reveal plenty of other reasons to keep kids out of public schools. There is, of course, the ongoing push for Common Core, which not only is pedagogically unsound but also involves data-mining of students at the state and federal level. Schools are being used to impose forced vaccinations on students. Students are being punished severely for trivial matters such as pretending their fingers are guns or bringing foam “bullets” to school. At least one prominent voice, that of Education Secretary Arne Duncan, is calling for public boarding schools. Schools are being used to indoctrinate students in left-wing ideology. To take just one example, Fox News reported that a major Virginia public-school system “is preparing to include gender identity to [sic] its classroom curriculum, including lessons on sexual fluidity and spectrum — the idea that there’s no such thing as 100 percent boys or 100 percent girls.” And the list goes on.

The good news is that educational freedom in America hasn’t been completely stamped out yet, and homeschooling is one way that parents can rescue their kids from the cesspool of public education. But opponents of freedom never rest, so neither can supporters. Otherwise, we shall all learn a very painful lesson at home — and everywhere else.