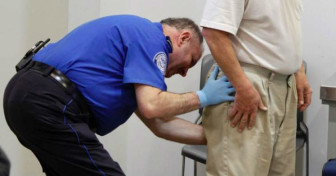 An internal Transportation Security Agency (TSA) undercover investigation has revealed that the agency’s airport checkpoints are almost complete failures when it comes to preventing explosives and weapons from being taken onto airplanes, reported ABC News.

To assess the TSA’s performance, Department of Homeland Security (DHS) Red Teams — described by then-TSA administrator John Pistole in 2013 as “super terrorists” who can devise ways to thwart TSA procedures — attempted to smuggle mock explosives or banned weapons through airport checkpoints while posing as airline passengers. Officials briefed on the results of these tests, carried out under the auspices of the DHS inspector general’s office, told ABC News that TSA agents failed 67 out of 70 tests, a failure rate of nearly 96 percent.

“In one test an undercover agent was stopped after setting off an alarm at a magnetometer, but TSA screeners failed to detect a fake explosive device that was taped to his back during a follow-on pat down,” wrote ABC News.

It’s hardly news that the TSA flunks both official and unofficial tests. As far back as 2003, college student Nathaniel Heatwole was able to repeatedly sneak box cutters, bleach, matches, and phony plastic explosives onto domestic flights, and it took the feds eight months to catch him. In 2013, a Red Team agent with an inert bomb in his pants got past TSA screeners at Newark Airport despite a pat-down. And last year, an undercover test of the TSA’s baggage-screening procedures “identified vulnerabilities in this area caused by human and technology-based failures,” according to an unclassified summary of the inspector general’s report. Indeed, so laughable are the TSA’s procedures that one former TSA screener publicly, though anonymously, declared his old job “a complete joke.”

That’s because what the TSA does isn’t security; it’s “security theater,” in the words of security expert Bruce Schneier.

“It’s infuriating,” Schneier told Vanity Fair in 2011. “We’re spending billions upon billions of dollars doing this — and it is almost entirely pointless. Not only is it not done right, but even if it was done right it would be the wrong thing to do.”

That, of course, hasn’t stopped the TSA from continuing to do it. The agency gets to lavish taxpayers’ money on high wages ($15 an hour to start at Newark Airport, according to the former screener) and fancy technology, which benefits the companies that produce it and the congressmen in whose districts they are located. Meanwhile, no one in Washington wants to shutter or even significantly shrink the TSA and then have to face voters if there’s another terrorist attack on an airplane, regardless of whether the TSA as currently constituted would have prevented it.

The latest tests flunked by the TSA have produced the predictable round of boilerplate promises to reform the agency.

“Upon learning the initial findings of the Office of Inspector General’s report, [Homeland Security] Secretary [Jeh] Johnson immediately directed TSA to implement a series of actions, several of which are now in place, to address the issues raised in the report,” the DHS told ABC News in a statement. Officials further told the network that “that security at the nation’s airports is strong,” though they admitted that the test results were “disappointing.”

Real reform is unlikely. The 2014 inspector general’s report noted that the TSA had “spent $540 million for checked baggage screening equipment and $11 million for training since 2009” yet had “not improved checked baggage screening since our last report in 2009.” In fact, the agency doesn’t even have any way to tell if its screening equipment is working properly, the report said. It was also revealed in 2013 that the TSA had shelled out $900 million for a behavior-detection program to spot terrorists at airports but had failed to arrest even a single terrorist; that program continues to fritter away taxpayer dollars to this day.

In other words, don’t expect much improvement from the TSA. It has always been ineffective at preventing terrorism; and being a federal agency, it probably always will be. But that doesn’t mean it’s a total failure, observed Ludwig von Mises Institute chairman and CEO Lew Rockwell. “The DHS airport scam has nothing to do with security or ‘terror,’” he blogged. “It’s about militarization, propaganda, spending, and getting us used to obeying every government order, no matter how outrageous. So, it’s been almost a complete success.”