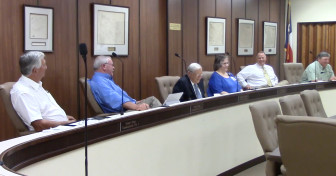 Prior to Bowie County Commissioners Court this morning, County Judge James Carlow reported on the effects of the flood, and the efforts of a great many people and organizations. He said, “We had a lot of different agencies working together, without anybody arguing.”

Local, state, and national agencies have been involved, and many restaurants and private groups have brought food to the workers and volunteers. Judge Carlow especially praised the inmates from the Bowie County Correctional Center and the Telford Unit for their work ethic and attitude. He said that some of them had the opportunity to return to the jail for scheduled visitation, but wanted to continue working.

Judge Carlow also briefly mentioned the dangers to parts of Texarkana that have apparently been disregarded by most of the public. Watch the video for details, and a (partial) list of those who volunteered or helped with food, etc.