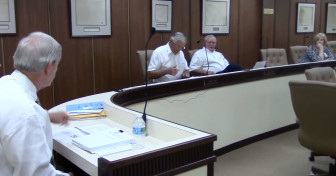 Commissioner Tom Whitten (Precinct 2) presided over Bowie County Commissioners Court today, while County Judge James Carlow traveled to Washington, DC. Commissioner Whitten welcomed County Clerk Tina Petty back to the Court – Ms. Petty has been receiving treatment for cancer, and everyone was glad to see her in good health.

The agenda item that received the most discussion was #6 – “Consider and take action to approve updates to the Odyssey and E-File Systems.” Commissioner Whitten described the importance of the system, and the risks of running an out-of-date version on old equipment. (Discussion of the agenda item begins at approximately 6:46 in the video, below.)

The cost of updating the system, including maintenance contracts, will be spread over several years. The amount needed now is $31,600, and Commissioner Mike Carter (Precinct 4) asked if the money was available in this year’s budget. County Auditor William Tye responded, “We’ll find it.”

When the time came for the vote, Commissioner Carter asked if the motion to spend the money should be amended to authorize an adjustment to the budget. (Discussion begins at approximately 11:58 in the video, below.)

After some back and forth about whether an adjustment or amendment should be done now, or wait until the invoice for the new system is received, Commissioner Carter asked, “So we just spend money now, and figure out how to pay for it when [the bill] gets here?” (The remark, “Of course,” heard in the video, came from a member of the audience.)

The county’s legal advisor, Carol Dalby, replied that the Court always waits until they get a bill to decide how to apportion the costs.

Tye explained that the cost of the system would be spread over 11 departments, and that while an amendment to the budget may be necessary, he didn’t anticipate that it would be necessary. Commissioner Carter responded, “I just want to make sure we’re doing it right.”

Tye replied, “I think we are.”

The motion passed unanimously, and according to the representative from the Information Technologies department, the upgrade will begin immediately.