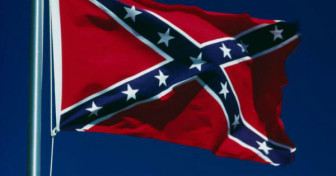 In the wake of the tragic shooting last week at the Emanuel African Methodist Episcopal Church in Charleston, South Carolina, lawmakers and residents are calling for the removal of the Confederate flag from the state Capitol. While debate over the flag is nothing new, controversy over it has reached new heights after a white male shot and killed nine people at the historic black church.

At around 9PM on Wednesday, June 17, 21-year-old Dylann Roof shot nine people participating in a Bible study at the Emanual African Methodist Episcopal Church in Charleston, S.C., eight of whom died at the scene. One person was pronounced dead at the hospital.

Roof spent an hour in the Bible study before opening fire. According to authorities, the shooter, who is affiliated with white supremacist groups, stated that his goal was to start a “race war.” Roof has been photographed holding the Confederate flag in various images on his website, which hosts a racist manifesto believed to have been written by him.

The ultimate decision to remove the flag from South Carolina’s Capitol rests with the General Assembly, whose session ended on June 4; however, South Carolina Governor Nikki Haley has indicated she will use her authority to call them back into session to debate the removal of the flag.

“Today, we are here in a moment of unity in our state, without ill will, to say it is time to move the flag from the Capitol grounds,” said Haley during a news conference attended by U.S. Republican Senators Lindsey Graham and Tim Scott, along with state leaders.

Haley’s statement was notable in that it represents a departure from her original stance. She views the removal of the flag as a symbol that the people of South Carolina are united against this act of terror. “The murderer, now locked up in Charleston, said he hoped his actions would start a race war. We have an opportunity to show that not only was he wrong, but that just the opposite is happening,” Haley said. “My hope is that by removing a symbol that divides us, we can move our state forward in harmony, and we can honor the nine blessed souls who are now in heaven.”

Senators Scott and Graham have voiced similar sentiments in regard to the flag’s presence at the Capitol. “I believe it is time for the flag to come down,” Scott declared, adding, “General Assembly will move to this topic swiftly, so that our state can continue to move forward.”

Likewise, Senator Graham said in a statement after the news conference, “I hope that, by removing the flag, we can take another step towards healing and recognition — and a sign that South Carolina is moving forward.”

Graham observed, however, that placing the weight of Roof’s actions on the flag is misguided. “We’re not going to give this a guy an excuse about a book he might have read or a movie he watched or a song he listened to or a symbol out anywhere. It’s him … not the flag,” Graham told the CNN program New Day’s Alisyn Camerota.

Defenders of the Confederate flag may note that demonizing something simply because bad people support it is a very slippery slope. After all, members of the Ku Klux Klan have often marched waving the American flag, and have also utilized the cross to convey a message of hate. But does that mean that Americans should no longer display the American flag or the cross? Likewise, people have used the Bible and the Koran to justify hateful and violent actions. Does that mean that we should no longer read these books? After Mark David Chapman killed Beatles’ member John Lennon, he reportedly opened up J.D. Salinger’s Catcher in the Rye and read it. But does that mean Salinger’s acclaimed work poses a threat?

It is perhaps for this reason that while some have revisited their position on the Confederate flag and determined it should be banned, others have continued to defend it as a symbol of Southern pride and begrudged the notion of connecting it to Roof and racism.

Ben Jones, for example, the chief of heritage operations for the Sons of Confederate Veterans, and a former Democratic U.S. congressman from Georgia, said the flag is flown throughout Southern culture to “mean the spirt of the South — the independen[ce], the rebelliousness of the South. Symbols mean different things to different people in different contexts. When you ask me what it symbolizes, it symbolizes, in a personal way, the courage and the valor of my ancestors, who in their time did what they believed was the right thing to do.”

South Carolina Republican Senator Kevin Bryant has stated that he would support legislation to take down the Confederate flag, but with reluctance. “I’m torn on the issue,” he explained. “There’s three groups of people. There’s some that find it offensive. And then there’s a small amount of people who use it as a symbol of hate. And then there’s a large group of folks who have had relatives that fought and died in the War Between the States.”

Bryant noted that many of his constituents support the Confederate flag for reasons having nothing to do with hate or racism. “I’ve talked to lot of constituents and there’s strong feelings on all sides,” he asserted. “It’s just unfortunate that some people, like this murderer in Charleston, use it as a symbol of hate. I don’t think the flag on the statehouse grounds had anything to do with this murderer.”

Jones also disclaimed any link between the flag and Dylann Roof, whom he called a “demented white supremacist,“ a “reactionary little drug addict,” and “a nowhere man who tried to make a name for himself.”

The Confederate flag holds a significant place in South Carolina history for a variety of reasons. The state was the first to secede from the Union just months after Abraham Lincoln was elected president, and the first shots of the Civil War were fired at Fort Sumter, South Carolina.

But South Carolina Congressman Doug Brannon, a Republican who has written legislation to remove the flag from the Capitol grounds, argues that those who defend the flag as a symbol of Southern heritage are unfamiliar with the history with the flag at the state Capitol, where it was placed in 1962 in order to signal resistance to the forced desegregation of southern schools and public places. “There’s a number of people in South Carolina that will tell you that flag represents their heritage,” Brannon said. “But the truth of the matter is, those people don’t understand the history of the flag, and the state Capitol. That flag may in fact be your heritage. But the flag of your heritage is the flag that was carried by battalions or divisions in a war 150 years ago.”

“The flag that I’m talking about,” he continued, “is the one that was put on the state Capitol dome in 1962 in response to desegregation. So … it’s two separate issues. The flag of their heritage is fine for them. And their flag of heritage needs to be in a museum. The flag that I’m talking about was put up by a bunch of white guys in 1962 in response to desegregation. And that’s not heritage. That’s hate.”

State Senator John Matthews, an African American, asserts that regardless of how the flag’s defenders view it, the flag represents something entirely different to black Americans. “To African Americans, we saw it as suppression,” Matthews told The Guardian.

Meanwhile, as the debate rages on, a number of leading merchants, including Walmart, Amazon, eBay, and Sears, have announced that they will remove all Confederate flag products from their shelves. “We never want to offend anyone with the products that we offer. We have taken steps to remove all items promoting the confederate flag from our assortment — whether in our stores or on our web site,” said Walmart spokesman Brian Nick. “We have a process in place to help lead us to the right decisions when it comes to the merchandise we sell. Still, at times, items make their way into our assortment improperly — this is one of those instances.” According to eBay spokesperson Johnna Hoff, the Confederate flag has “become a contemporary symbol of divisiveness and racism.”

As observed by the Blaze, however, while the eBay and Amazon merchants have decided to no longer sell Confederate flag merchandise, they continue to sell other items with offensive images, such as the swastika and images of Che Guevara. Likewise, a quick search of a hammer and sickle on eBay and Amazon turns up quite a number of items. It seems like a totalitarian “ism” that resulted in the deaths of millions and millions of people would provoke the at least as much ire and disdain from these merchants as the Confederate flag does.