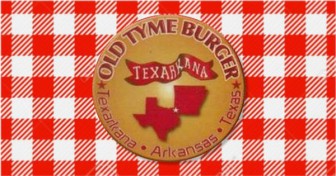 When it comes to long standing establishments with a great history in Texarkana, none ring louder than the Old Tyme Burger. Located on Arkansas Boulevard near the intersection of Jefferson and Arkansas, a person only needs to look for the large sign presiding over the parking lot full of cars to find this little jewel of Texarkana. With the exception of times that the Old Tyme Burger is closed, there is almost always a lot full of vehicles. The number of patrons alone speaks volumes to the great food and outstanding service.

I decided to take two visits to the Old Tyme Burger to ensure I obtained a clear picture of what the rest of Texarkana already seems to know. It did not hurt that I also obtained two great tasting burgers. The first time I went was just after the lunch rush. I placed my order and received it within about seven minutes. The second time I went I thought I’d see how the lunch rush would handle orders. I was pleasantly surprised to find that my burger arrived in about ten minutes.

During both visits I watched other people order a variety of food from the menu. I did notice that the time differences depended greatly on the food ordered. This is to be expected, but still did not stop the Old Tyme staff from letting people know how the order was going. They filled glasses with drinks, apologized for the delays, and served food as quickly as possible. The restaurant remained full all through the lunch hour with people admiring the various pictures on the walls, including some very nice pictures of the historic downtown Texarkana area on the walls of the second, or side, dinning room.

Finally, there is nothing negative to say about the food or staff. The burgers I ate on the two visits were outstanding and cooked to order. Staff were attentive and seemed to memorize your order from the time it was placed to the time it was served at the table. The burgers are thick, juicy, and seasoned to perfection. As far as the rest of the food on the menu goes, I haven’t tried it all, but I can tell you that the patrons enjoying other items in the restaurant didn’t seem to complain. It is apparent that no review of this great restaurant was needed in the eyes of Texarkana, and one look at their Facebook page confirmed that I am just rehashing what a lot of people already know. Old Tyme Burger is still a great time in Texarkana, USA.