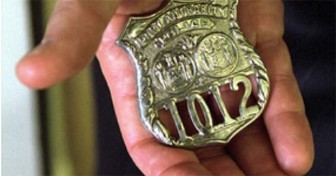 Just two weeks before the brutal assassination in Houston of Harris County Deputy Darren Goforth, armed New Black Panthers shouted, “You’re gonna stop doing what you’re doing, or we will start creeping up on you in the darkness!”

The threat was made by the Panthers as they marched around the Waller County jail, in the Houston metropolitan area. Exactly what the police were to stop doing was not specified, nor was what would be done as Panthers crept up on police.

But what is clear is that on the night of August 28, Harris County Deputy Darren Goforth was simply pumping gas into his patrol vehicle at a convenience store, when a black male, Shanon Miles, allegedly shot him dead with a pistol.

Regardless of whether the threats made by the New Black Panthers and the alarming increase in unprovoked attacks upon law-enforcement officers are related, the country is now witnessing a virtual war on the police by the criminal elements of society.

Lt. Joseph Gliniewicz, a 30-year veteran of the Fox Lake, Illinois, police force (north of Chicago), was killed a week ago. A massive manhunt is underway for three suspects, two white and one black. Officer Gliniewicz, the married father of four sons, was to have retired this month.

State Representative Barbara Wheeler of Fox Lake called for prayer for the officer’s family and other officers in harm’s way, noting that 11 police officers have lost their lives in the country “since August 20th alone.”

As reported by The New American, Milwaukee County Sheriff David Clarke cast blame for the epidemic of police killings directly on President Obama and former Attorney General Eric Holder, even calling them high-profile accessories to the crimes. Clarke contended that the racially tinged rhetoric against law enforcement officers by the Obama administration has been a direct cause of the recent increase in attacks upon the police.

In St. Paul, Minnesota, Police Federation President Dave Titus expressed similar disgust at a recent protest march to the gates of the state fair. Though the gathering was peaceful, the rhetoric of marchers was intense, as they chanted in unison, “Pigs in a blanket — fry ’em like bacon.”

Titus expressed amazement that the chant came just hours after the murder of the deputy in Texas. “I don’t think chanting or singing what’s basically promoting killing police officers is peaceful,” he asserted.

Black Lives Matter organizer Rashad Turner defended the inflammatory rhetoric. “It definitely wasn’t a threat. I don’t know if they would have received it differently if we would have said ‘on a stick.’ We’re there chanting, using our voices.”

In an ironic twist, the protest marchers received police protection.

Last month in Memphis, Tennessee, officer Sean Bolton spotted an illegally parked car. After pulling up in front of the vehicle and shining his lights on it, he began to approach the automobile. Suddenly, a passenger confronted Bolton and shot him several times. The assailants then drove off, leaving the officer at the scene. He later died in a local hospital.

Twenty-four law-enforcement officers have now been killed this year in non-accidental gun deaths in the line of duty.

While police officers and deputy sheriffs must always be alert to possible violence in the line of duty, there has been a sharp escalation of attacks since the riots in Ferguson, Missouri, last year, in which a young black man was killed by a white police officer. It is to be expected that race-baiting opportunists such as Al Sharpton will use such incidents in an attempt to stir up discord, and that open racists such as the New Black Panthers will even call for violence.

But what is especially shameful is that most of the anti-local police rhetoric is originating from powerful politicians across the country, including President Obama and his former attorney general.