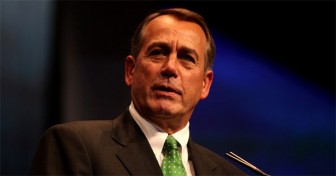 Press Release: Today, U.S. Representative John Ratcliffe (R-TX) released the following statement following the announcement that John Boehner will resign as Speaker of the House and leave Congress at the end of October:

I have respect for anyone who dedicates his or her life to public service, and thank the Speaker for his decades of work on behalf of the State of Ohio and the American people. Looking forward, I see this as an opportunity for Republicans to unite the party in order to advance a more aggressive conservative agenda.

I first ran for Congress because I believed we needed bold, conservative leadership to tackle the challenges our country faces. Since taking office, I’ve been a frequent critic of the tactics used by House Leadership and their lack of conservative resolve. This frustration, which is shared by a majority of my constituents, is one of the reasons why I’ve so frequently voted against leadership.

Going forward, it’s important for House Republicans to remember that we are the governing majority of America explicitly tasked by our constituents to defend the Constitution, secure our freedoms and liberties, protect our homeland, reduce the overreach of the federal government, and fight back against a reckless President. I will support leaders who are serious about this mission, who will not waver in their conservative principles.

America has always been a nation which thrives on the prospect of a better tomorrow. When we are presented with challenges, we always rise to the occasion. I feel that this change in leadership will provide just that – an opportunity going forward for Republicans to start winning again.