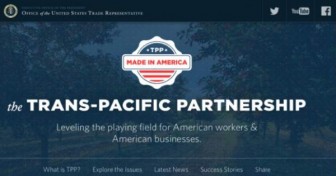 Despite recent wrangling and threats to withdraw, on October 5 the U.S. trade representative joined 11 trade ministers from around the Pacific Rim to announce the successful conclusion of the Trans-Pacific Partnership (TPP).

“After more than five years of intensive negotiations, we have come to an agreement that will support jobs, drive sustainable growth, foster inclusive development, and promote innovation across the Asia-Pacific region. Most importantly, the agreement achieves the goal we set forth of an ambitious, comprehensive, high standard and balanced agreement that will benefit our nation’s citizens,” the negotiators said in a joint press release.

Although the TPP was agreed to in principle, the precise text of this “ambitious, comprehensive” document remains a mystery.

The statement issued from Atlanta — site of the most recent round of negations — included a commitment to “work to prepare a complete text for public release,” although notably no timetable for that disclosure was announced.

Rather than rely on Congress for approval of the trade pact, the USTR and his colleagues “look forward to engaging with stakeholders on the specific features of this agreement.”

That sort of disregard for constitutional separation of powers and related checks on power is indicative of the entire plan, which would subvert U.S. sovereignty in the name of “integration” with Pacific nations party to the pact.

Integration is a word that is painful to the ears of constitutionalists and those unwilling to surrender U.S. sovereignty to a committee of globalists who are unelected by the American people and unaccountable to them. Integration is an internationalist tool for subordinating American law to the globalist bureaucracy at the United Nations.

Economic and political integration will push the once independent United States of America into yet another collectivist bloc that will facilitate the complete dissolution of our country and our states into no more than subordinate outposts of a one-world government.

As with the multitude of similar trade pacts the United States has formed, the ultimate aim of the TPP is the creation of a regional super government, thus the stonewalling of federal lawmakers who dare seek to assert some sort of oversight.

In the case of the TPP, the zone would be called the Free Trade Area of the Asia Pacific (FTAAP). Members of the proposed “free trade” bloc include all the current TPP participants: Malaysia, Singapore, Japan, Vietnam, Brunei, Australia, New Zealand, Peru, Mexico, Chile, Canada, and the United States. The regional trading partnership is intended to establish “a comprehensive free trade agreement across the region.”

The ultimate goal of the TPP isn’t just the creation of an FTAAP, though. Supporters of the deal insist that the TPP is a “trade agreement designed to achieve broad liberalization and a high degree of economic integration among the parties.”

Although the Obama administration has gone to great lengths to keep the details of this destructive document a secret, a few proposed paragraphs have surfaced.

Another WikiLeaks disclosure in January 2014 revealed that the president was attempting to surrender sovereignty over U.S. environmental policy to international bureaucrats interested in lowering those standards to mirror those of our TPP partner nations. Naturally, the green lobby criticized this concession, organizing demonstrations opposing the agreement.

U.S. copyright laws, Internet freedom, and web-based publishing would also be obliterated by the TPP, and although it hasn’t been widely reported, the TPP would give the global government sweeping surveillance powers, as well.

Although the American people (and the people of all nations involved in the pact) are prevented from seeing or commenting on the treaty being ostensibly negotiated on their behalf, multinational corporations have seats at the trading table.

While the TPP grants corporate giants such as Walmart and Monsanto the power to bypass Congress and the courts, the elected representatives of the American people are kept from even seeing the draft version of the agreement.

As unbelievable as it may seem, something even more sinister could be lurking within the shadowy recesses of the TPP.

In June, this reporter wrote, regarding the potential use of so-called fast track trade authority by the president to implement civilian disarmament:

Consider this: If Congress grants the president the power to unilaterally negotiate and contract trade agreements with foreign powers, these “executive agreements” can cover any topic that the White House considers “trade.”

If the TPA passes, then the United Nations Arms Trade Treaty (ATT) would not need to be subject to senatorial debate. In fact, it would not be up for debate at all. TPA calls for a simple up or down vote on such presidentially brokered international agreements.

Within two weeks of that warning, Congress capitulated to President Obama, granting him power beyond that which the Constitution allows. That power, then, might be the crowbar with which he removes guns from the hands of Americans.

In fact, it wouldn’t be surprising to find that the TPP requires the federal government to disarm its citizens in the name of “safety.”

The New American’s senior editor William Jasper is well aware of the danger of disarmament in the now completed TPP. He writes:

This is not an “out there” question; it should be a genuine concern of all who treasure the Second Amendment. Constitutional champion Michael Hammond, the longtime executive director of the Senate Steering Committee, has warned that “there is ample time to insert firearms import bans (with the force of statutory law)” into the TPP and/or TTIP. “Barack Obama has been rabid in his zeal to destroy the Second Amendment community,” Hammond notes. “Over and over again, he has experimented with a wide variety of schemes to ban guns by regulatory fiat: eliminating credit, banning ammunition, compiling a gun registry, encouraging state bans, reclassifying common guns, banning the import of guns, and so forth. Hammond, who is now general counsel for the Gun Owners of America, notes that despite Obama’s notorious anti-gun record, the Republican “leadership” in Congress “didn’t see fit to even purport to prohibit the Obama administration from using a trade agreement to impose a statutory gun import ban.”

In a comprehensive constitutional review of the reasons Americans should oppose the TPP, Jasper exposes this fallacy, as well:

As with NAFTA and every other pseudo-free trade agreement, there are many politicians, lobbyists, and think tanks making pie-in-the-sky claims that TPP and TTIP will usher in new prosperity and a wave of good-paying jobs. We’ve been there before. In 1993, the Peterson Institute for International Economics released its influential study, “NAFTA: An Assessment,” which predicted that “with NAFTA, U.S. exports to Mexico will continue to outstrip Mexican exports to the United States, leading to a U.S. trade surplus with Mexico of about $7 (billion) to $9 billion annually by 1995.” It also predicted that the U.S. trade surplus with Mexico would increase to $12 billion annually between 2000 and 2010. The actual result was quite different.

In 1993, the year before NAFTA went into effect, the United States had a $1.66 billion trade surplus with Mexico; by 1995, the first year after NAFTA had entered into force, that changed to a $15.8 billion deficit. By 2000, that annual deficit had soared to $24.5 billion, and by 2007 it hit $74.7 billion. For 2014, our trade deficit with Mexico dipped to only $53.8 billion. In 1993, the year before NAFTA, we imported around 225,000 cars and trucks from Mexico. By 2005, our imports of Mexican-made vehicles had tripled to 700,000 vehicles annually, and in 2012, Mexico’s export of vehicles to the United States surpassed 1.4 million. Chrysler, Ford, and GM transferred major production facilities (and jobs) from the United States to Mexico. Our trade deficits with Canada have followed a similar path since adoption of NAFTA.

The PIIE authors and other pseudo-free trade propagandists had cherry-picked data and simply invented statistics to fraudulently sell their product: NAFTA. If they were car salesmen, they would have gone to jail for fraud and misrepresentation. Instead, they are back doing the same thing, concocting rosy statistics to sell the TPP and TTIP.

Americans who study the subject realize that the redrawing of national boundaries and domestic legal processes completed in secret this week by the globalists sitting around the TPP negotiating table in Atlanta is an attack on American laws, American courts, American freedom of expression, American sovereignty, and the American Constitution.

The American people must unite in firm opposition to the TPP and convince Congress to tear down the wall of secrecy built and maintained by globalists seeking to shield their attack on our law and liberty from congressional oversight.

Assuming the TPA-empowered president gives them a chance to vote on the agreement, Congress must be convinced to reject the TPP. If they are not given that chance or if they are allowed to vote on the TPP and they approve it, then such an act might finish the integration — economic and political — begun by NAFTA and it may be the last straw in the already weakened broom of American sovereignty.