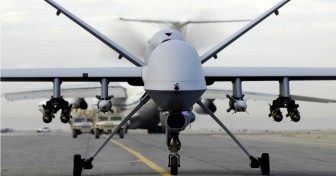 Almost 90 percent of those executed during a five-month period in the Obama administration’s mass-murder-via-drone machinations were not even specific targets selected by the White House for extrajudicial assassination, according to reports surrounding a massive leak of classified official U.S. documents unveiled this week by The Intercept. In fact, it appears that despite his purported concerns over the death of innocents, Obama has killed far more innocent civilians, some of them U.S. citizens, than all of the mass-shooters in the United States throughout his term in office — combined.

To add insult to injury, the administration’s assassination squads — essentially operating under the Central Intelligence Agency (CIA) and the Pentagon’s Joint Special Operations Command (JSOC) — routinely label the unintended and unidentified victims of its deadly schemes as “enemy killed in action,” even when there is little or no evidence of that being the case. “Anyone caught in the vicinity is guilty by association,” the whistleblower was quoted as saying. But as more information emerges, the outcry is growing louder.

The leaked materials, which cover 2011 to 2013, offer unprecedented insight into what is, at its core, an unconstitutional and murderous crime spree of epic proportions led by the Obama administration. The documents also shed new light into how a person ends up on Obama’s secret “kill list” — no charges, no trial, no jury, no due process of law, no innocent until proven guilty, no nothing — and what happens after that. All it takes is Obama’s word, and it’s off with your head — powers that even the world’s most murderous dictators have not been so open and nonchalant about usurping.

Making matters worse, the official documents leaked by the whistleblower show that raining death down from the sky is becoming institutionalized and normalized within the administration. They also suggest that instead of making Americans safer, the killing spree is creating a future tsunami of terrorism. And rather than the mass-murder programs slowing down, all indications point to their dramatic expansion, with no end in sight.

The implications should terrify every American — including Obama supporters who trust the current White House occupant but may not be as pleased with future U.S. presidents, or perhaps with foreign regimes, doing the same thing. In a series of eight investigative articles based on the revelations and six months of reviewing the materials, The Intercept documented some of the concerns — the loss of valuable intelligence from assassinating targets with information, the massive civilian death toll, the threat to traditional American ideals of justice, and much more.

After the articles came out, various organizations focusing on human rights and other issues also sounded the alarm. As the scandal grows, more and more voices are calling for congressional action and even international efforts to rein in the deadly schemes and explore the implications in more depth. But other alarming potential fruits of the murderous scheming have largely been left unaddressed thus far.

What if, for example, hostile foreign regimes — the ones ruling Russia, Communist China, North Korea, Cuba, Iran, and on and on — started dropping bombs on targets in the United States or other countries, based on secret information, by claiming they were “hunting suspected militants”? Already, the United Nations, with support from Obama, is deploying unmanned aerial drones in support of its scandal-plagued “peacekeeping” armies. U.K. authorities are also assassinating people, in some cases their own citizens, in a similar manner.

With the U.S. government having already established the precedent, there is now little standing in the way of other governments deciding to start compiling “kill lists” for extrajudicial execution. Across multiple countries and continents — particularly Yemen, Somalia, Iraq, and Afghanistan — the American Nobel Peace Prize winner’s reign of terror has been raining down massacres from the sky since he took office in 2008. Even before that, the Bush administration had been lawlessly murdering people with missiles fired from drones, although on a far more limited scale.

Under Obama, the massacres have expanded to unprecedented levels, leaving death, destruction, and enough seething anti-American hate to fuel endless waves of terrorism into the future. The drone wars have also resulted in an “apparently incalculable civilian toll,” according to investigative reporter Jeremy Scahill with The Intercept, which obtained the documents from a source within the intelligence community who was involved in the types of operations described in the leaked documents.

According to Scahill, the source decided to leak the documents because he believes the American people have a “right to understand the process by which people are placed on kill lists and ultimately assassinated on orders from the highest echelons of the U.S. government.” Until now, despite smaller-scale leaks and occasional news reports, that has mostly been shrouded in mystery — even after the Obama administration murdered a 16-year-old American boy with a drone-fired missile. Dozens of Americans may be on Obama’s hit list, and Obama’s disgraced former Attorney General Eric Holder even wrote a twisted legal justification purporting to authorize Obama to murder U.S. citizens without charge or trial.

There have, of course, been some hints about it all. For instance, retired General Michael Hayden, the former boss of both the NSA and the CIA, boasted that the Obama administration has been murdering people around the world based solely on the so-called metadata collected by U.S. intelligence agencies. News reports about guests of wedding parties blown to smithereens by Obama’s bombs, and other tragedies, have also appeared over the years.

But now, the American people no longer have an excuse to stand idly by while the president, using their tax money, conspires with his “advisers” to secretly assassinate people, the source told The Intercept.

“This outrageous explosion of watchlisting — of monitoring people and racking and stacking them on lists, assigning them numbers, assigning them ‘baseball cards,’ assigning them death sentences without notice, on a worldwide battlefield — it was, from the very first instance, wrong,” the source was quoted as saying in one of the online journal’s reports about the leaked documents. “We’re allowing this to happen. And by ‘we,’ I mean every American citizen who has access to this information now, but continues to do nothing about it.”

Scahill said the source requested anonymity because the materials were classified, and that The Intercept granted the request because the Obama administration has “engaged in aggressive prosecution of whistleblowers.” And indeed, as this magazine and numerous other sources have documented, Obama’s “war on whistleblowers” has been unprecedented, with the administration even exploiting espionage laws to target and terrorize Americans who expose government crimes.

The source, echoing the content of the leaked materials, also suggested that the murder-by-drone or Special-Operations hit-squad was becoming entrenched within Washington. “The military is easily capable of adapting to change, but they don’t like to stop anything they feel is making their lives easier, or is to their benefit,” the whistleblower was quoted as saying. “And this certainly is, in their eyes, a very quick, clean way of doing things. It’s a very slick, efficient way to conduct the war, without having to have the massive ground invasion mistakes of Iraq and Afghanistan. But at this point, they have become so addicted to this machine, to this way of doing business, that it seems like it’s going to become harder and harder to pull them away from it the longer they’re allowed to continue operating in this way.”

The source and the documents also shed light on what is happening to the U.S. servicemen and their sense of morality when they are lawlessly ordered to hunt down people to kill them without even a semblance of due process. Within the “special operations community,” the source told The Intercept, the targets selected for assassination are utterly dehumanized.

“They have no rights. They have no dignity. They have no humanity to themselves. They’re just a ‘selector’ to an analyst,” he was quoted as saying. “You eventually get to a point in the target’s life cycle that you are following them, you don’t even refer to them by their actual name.” The practice contributes to “dehumanizing the people before you’ve even encountered the moral question of ‘is this a legitimate kill or not?’” he added.

Oftentimes, the “intelligence” used to track and murder people is brazenly incorrect, too, the source explained. “It’s stunning the number of instances when selectors [things like phone numbers] are misattributed to certain people,” he continued. “And it isn’t until several months or years later that you all of a sudden realize that the entire time you thought you were going after this really hot target, you wind up realizing it was his mother’s phone the whole time.”

Meanwhile, the leaked documents show that the Obama administration lies to the American people about its mass-murder program. According to the White House, for example, it only murders somebody — and murder is the correct term, since none of the victims has been proven guilty and properly sentenced to death in a court of law, and there are no declared wars going on — if that person poses a “continuing, imminent threat to U.S. persons.” The documents, however, show that somebody can be assassinated merely for allegedly posing “a threat to U.S. interest or personnel.”

In other words, under that standard, if you threaten whatever Obama claims is the “U.S. interest” — supporting jihadists in the Middle East, disarming Americans, nationalizing everything from education and healthcare to law enforcement, murdering “suspected militants” with drones, and much more — you can potentially have a missile land on your house or on your wedding. The short- and long-term implications, again, should terrify everyone. All of the agencies and departments involved refused to comment, citing the fact that the leaked documents are classified.

Then consider that the Obama administration has already made abundantly clear that it considers Americans with mainstream political views — particularly conservatives, libertarians, constitutionalists, veterans, and Christians — to be the primary threat to the “Homeland.” Perhaps instead of making a spectacle and worrying about how to strip Americans of their right to keep and bear arms with more “gun control,” lawmakers in Congress can begin with some “Obama control” to rein in the deadly White House reign of terror.