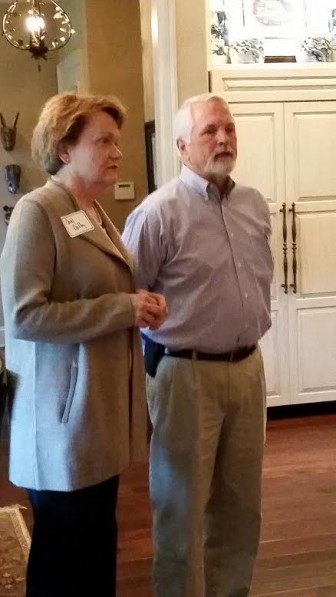 At the home of Curt and Diane Green, Carol Dalby kicked off her first “Meet and Greet” to a full house. The Greens graciously opened their home to friends and supporters of Dalby as she talked with guests, gave a short speech, and spent an evening listening to the concerns of voters.

Curt Green introduced Dalby as someone Texarkana needs. He pointed out that she will work hard for the city and the district, and stressed the importance of Texarkana’s House of Representatives District One having a strong voice in Little Rock. Current Representative Mary “Prissy” Hickerson, campaign manager for Dalby followed up by stressing that not only is Dalby from Texarkana, but she has also been a teacher, a lawyer and a judge. Hickerson joked that Dalby will “understand all those big-lawyer-written bills better.”

After introductions Dalby spoke to the packed home that included current candidates, city and county officials, and several business leaders from both Texarkana Arkansas and Texarkana Texas. Dalby stressed the importance of working in Little Rock for the good of Texarkana, and both sides of the line. She stated that if Texarkana Texas suffers, the Arkansas side suffers and if the Arkansas side suffers, the Texas side suffers. Dalby indicated that she felt it was important to represent all the people of the area and ensure continued economic growth for Texarkana as a whole.

Carol Dalby is a graduate of Arkansas High School, Ouachita Baptist University and East Texas University, and she is a graduate of the University of Arkansas School of Law in Fayetteville. She has been a schoolteacher, an attorney, and served ten years on the Arkansas Supreme Court. Mrs. Dalby will officially file her candidacy in Little Rock during the November 2nd through 9th filing period.