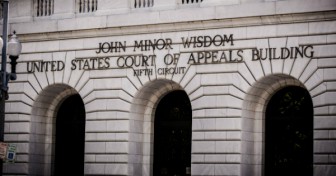 “We affirm the preliminary injunction because the states have standing; they have established a substantial likelihood of success on the merits,” Judge Jerry Smith wrote for the majority.

Texas Attorney General Ken Paxton (whose predecessor, Governor Greg Abbott, represented Texas in filing the lawsuit) commented: “Today, the Fifth Circuit asserted that the separation of powers remains the law of the land, and the president must follow the rule of law, just like everybody else.”

White House Press Secretary Josh Earnest was also quick to make a statement about the decision, saying: “We strongly disagree with the Fifth Circuit’s decision. The Supreme Court and Congress have made clear that the federal government can set priorities in enforcing our immigration laws.”

However, the injunction upheld by this latest decision was not issued because of the administration’s “priorities,” but because it had decided not to enforce immigration law as passed by Congress. Hanen issued his injunction in response to a lawsuit filed by Texas and 25 other states against the federal government following President Obama’s November 20, 2014 announcement that he would suspend immigration law as applied to four million illegal immigrants.

The plaintiffs charged: “The President candidly admitted that, in so doing, he unilaterally rewrote the law: ‘What you’re not paying attention to is, I just took an action to change the law.’ ” (Emphasis in original.)

I hereby direct USCIS [U.S. Citizenship and Immigration Services] to establish a process, similar to DACA, for exercising prosecutorial discretion through the use of deferred action, on a case-by-case basis, to those individuals who:

It was this executive level memorandum issued by Johnson that prompted Texas and 16 other states (nine others would later join in the suit) to pursue a lawsuit against the Obama administration at the Federal Court in the Southern District of Texas. Following Hanen’s ruling in their favor, the administration filed an appeal with the Fifth Circuit Court of Appeals in New Orleans. That court decided on May 25 to let the judge’s decision stand, but postponed a final decision while considering arguments filed by both sides. Now that the court has rendered its final word on the matter, the only recourse for the Obama administration is to appeal to the Supreme Court, and the Justice Department announced on November 10 that it will do exactly that.

A report in The Hill noted that although the decision is a defeat for the Obama administration, its timing — which still allows an appeal to be considered by the Supreme Court during its present term — also provides a ray of hope for the White House. While Supreme Court terms technically begin and end on the first Monday of October, justices typically hear arguments and announce decisions until late June or early July. Therefore, there are about eight months left for the court to take up an appeal and render a decision.

The chances of the High Court  considering an appeal and rendering its decision in time for the administration to resume its DAPA program and DACA expansion — should the decision go its way — have been the subject of much speculation in the press. One such article posted by Vox Media noted that if the Supreme Court takes up the case, it could render its decision by next June. As for how that decision might go, the Vox writer speculated:

The Fifth Circuit is generally thought to be more conservative than the average federal court of appeals. At the Supreme Court, meanwhile, it’s generally assumed that the four liberal justices will side with the Obama administration, and it’s entirely possible that swing vote Anthony Kennedy will side with them too. So supporters of the Obama administration are looking to the dissent in the Fifth Circuit case — written by the Democratic appointee on the panel — for a model of what they hope the Supreme Court decision will look like.

Even if the Supreme Court decides in the Obama administration’s favor around June, Obama will have just six or seven months left in office to get the DAPA and DACA amnesty programs going. While a Democratic presidential winner such as Hillary Clinton in the November election might be expected to continue them, a Republican victor would just as likely end them.

However, a decision favoring the administration might have a more important impact on the election, itself, than it would on the DAPA and DACA programs. A pro-administration decision might be viewed as a boost for the Democratic candidate and a rebuke of the Republican nominee’s anti-amnesty position or galvanize anti-amnesty voters to vote.