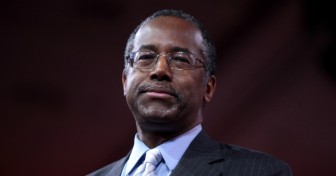 Pediatric neurosurgeon and 2016 GOP frontrunner Ben Carson has easily fended off most of the spurious attacks from the establishment press, but growing conservative outrage over the Carson campaign’s recent announcement of support “with reservations” for Obama’s deeply controversial Trans-Pacific Partnership deal may prove more tricky. Ironically, the Carson camp claimed Carson supported the deal, dubbed “ObamaTrade” by critics, as a “counterbalance to China’s influence” just two days after the Obama administration publicly invited the brutal Communist Chinese dictatorship and Russia’s Vladimir Putin to join the TPP as well. Among many of Carson’s conservative supporters, the pro-TPP position is likely to be a bitter pill to swallow, if it can be swallowed at all.

The Obama administration has been promoting the controversial managed-trade scheme as the “most progressive trade agreement in history.” However, despite the stigma of the “progressive” label attached to the plot by its own chief architect, top establishment Republicans — often ridiculed as RINOs among conservatives — have been instrumental on the road to making ObamaTrade a reality. Among other concerns cited by critics is the fact that the TPP regime, which brings together 12 governments including communist and Islamist dictatorships, creates supranational kangaroo courts and regulatory bodies that are purportedly superior to U.S. and state law and court rulings. It also opens the immigration floodgates, and according to U.S. Senator Jeff Sessions (R-Ala.), represents European Union-style “global governance.”

But none of that appears to have fazed Carson, who recently soared to the top of multiple national polls on the Republican Party presidential primary before announcing his support for TPP. Initially, he expressed skepticism over the scheme with the left-wing Huffington Post, saying he would not give Obama “Fast-Track Authority” to ram it through. On November 6, though, the Wall Street Journal, citing Carson campaign spokesman Doug Watts, reported that Carson “believes the agreement does help to level the playing field in key markets and is important to improve our ties to trading partners in Asia as a counterbalance to China’s influence in the region.” The spokesman also said Carson was “now inclined to support TPP, with reservations.” In doing so, the Journal reported that Carson was “aligning himself more with the GOP’s establishment wing than with the social conservatives who have powered his campaign.”

And not just aligning himself with the increasingly embattled establishment wing of the party, but with a demonstrable falsehood: the notion that the TPP will serve as a “counterbalance” to Beijing. As The New American reported on November 4, two days before the Carson campaign announced its support for TPP, Secretary of State John Kerry invited the murderous communist regime to join TPP, as well. “We invite people to come join other initiatives, like the Trans-Pacific Partnership, the TPP,” Kerry said in an interview with Russian interstate channel Mir TV. “We welcome China, we welcome Russia, we welcome other countries who would like to join, as long as they want to raise the standards and live up to the highest standards of protecting people and doing business openly and transparently and accountably.” The Obama State Department later told Breitbart that, “at this time,” there are “no talks with other countries on joining the TPP.”

Of the other GOP candidates, most have officially tried to distance themselves from Obama’s mammoth, secretly negotiated 5,500-plus-page “agreement” to subvert U.S. sovereignty and self-government. The other leading GOP contender, business mogul Donald Trump, recently blasted the TPP as “insanity,” saying it would be a great deal for Communist China but that only U.S. politicians “totally controlled by the lobbyists and the special interests” could support it. Mike Huckabee, Bobby Jindal, Senator Ted Cruz, and Carly Fiorina have also slammed the scheme, often using harsh words.

Senator Rand Paul, perhaps hoping to please the establishment wing of the party, shot his campaign in the foot early on among grassroots conservatives, libertarians, and constitutionalists when he called for Obama to “prioritize” the globalist TPP. He now says he opposes it. Even Senator Marco Rubio, who helped Obama get “Fast-Track Authority” to ram the scheme through, has now distanced himself from it, perhaps sensing the outrage among GOP primary voters. That essentially leaves only unpopular establishment candidates Jeb Bush, John Kasich, and Chris Christie, whose campaigns have largely become a joke among conservative GOP primary voters, still openly supporting Obama’s TPP.

Among Democrats, both Hillary Clinton and Bernie Sanders have claimed to oppose the TPP. Sanders has been opposed from the start. However, Clinton called the scheme the “gold standard” while serving as Obama’s secretary of state, and few credible analysts take seriously Clinton’s more recent efforts to distance herself from the U.S. jobs-destroying ObamaTrade agenda on the campaign trail.

Now that the full text of the TPP has been released, it is becoming even harder for politicians, especially Republicans, to publicly support the pseudo-“free trade” scheme, which creates essentially a regional government over the nations ensnared in it. “The text of the Trans-Pacific Partnership runs 5,554 pages,” declared Senator Jeff Sessions (R-Ala.) in a statement after the release of the agreement. “This is, by definition, anti-democratic. No individual American has the resources to ensure his or her economic and political interests are safeguarded within this vast global regulatory structure. The predictable and surely desired result of the TPP is to put greater distance between the governed and those who govern. It puts those who make the rules out of reach of those who live under them, empowering unelected regulators who cannot be recalled or voted out of office. In turn, it diminishes the power of the people’s bulwark: their constitutionally formed Congress.”

While much of the establishment media has been trying desperately to demonize Carson with phony non-scandals they invented, analysts said the attacks by the “mainstream” media have only made his campaign stronger among conservative voters — the overwhelming majority of whom distrust the left-wing national press to begin with. However, by announcing his support for the TPP, Carson may now have a real problem on his hands. Without the grassroots supporters who have boosted his campaign, Carson would never have become one of the top contenders for president. And yet, those same grassroots supporters are overwhelming and vehemently opposed to surrendering U.S. sovereignty and self-government under ObamaTrade. Analysts say TPP will be a major factor in the 2016 race. For Carson, that may be major bad news.