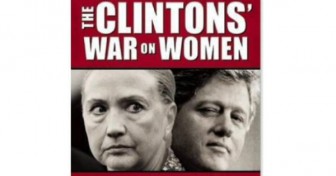 Roger Stone and Robert Morrow’s new book, The Clintons’ War on Women, is a timely reminder of why all decent Americans, and especially conservatives, found Bill and Hillary Clinton’s actions so repellent.

After President Obama’s myriad unconstitutional actions — amnesty schemes, the Fast and Furious undercover operation that sent thousands of guns to Mexican drug cartels, the IRS scandal, drone murders without trials, “pen and phone” executive actions, NSA spying, and much more — many constitutionalists have forgotten just how damaging the Clinton presidency was as well

The title of Stone and Morrow’s book doesn’t convey the full scope of its contents. More than half the volume covers topics having little to do with Bill and Hillary’s maltreatment of the women used — and then disposed of — by Bill, though that topic is well covered.

Perhaps the most unsettling of the title stories was the one told by Juanita Broaddrick, a county coordinator in Bill Clinton’s first run for governor of Arkansas in 1978. According to Broaddrick, Clinton — then the attorney general of Arkansas — raped her twice, once biting her lip so hard “he almost severed it.” As he left the room after that brutal sexual assault, he noted her swollen lip and callously quipped, “You better get some ice on that.”

This book alleges that Clinton raped other women, as well, including some while he was a Rhodes Scholar at Oxford. Many remember the story of Clinton, while governor of Arkansas, requesting state employee Paula Corbin [later Jones] to perform a sexual act on him. It was Jones’ lawsuit against Clinton that led to his lying under oath in a deposition about his sexual relationship in the White House with Monica Lewinsky. Clinton was impeached in the Lewinsky case by the House of Representatives, although he was later acquitted by the Senate.

President Clinton also lied on television to the American people about the Lewinsky affair. On January 26, 1997, with Hillary at his side and the cameras rolling, Clinton uttered one of the most famous whoppers in American presidential history: “I want you to listen to me. I’m going to say this again: I did not have sexual relations with that woman, Miss Lewinsky. I never told anybody to lie, not a single time; never. These allegations are false.”

Hillary’s presence at his side well illustrated the role she played in supporting his “war on women.” It was she who insisted that no settlement be made with Paula Jones.

Kathleen Willey, yet another woman who charged Clinton with sexual assault in the White House, blamed Hillary for enabling her husband’s predatory treatment of herself and other women.

Willey recalled that terrible time, as quoted in Stone and Morrow’s book: “This woman [Hillary Clinton] wrote the book on terrorizing women, on terrorism. Her tactics and the things that she set in motion against all the women like me, the ones you have heard of and the ones you haven’t heard of, and ones who are so scared that they fled the country, are terrorist tactics like I have never seen before. I went through them. I lived through them…. She is the war on women.”

Willey should know. Though she had not wanted to testify in the Paula Jones case, a subpoena forced her to do so. She was scheduled to be deposed during the discovery process in the lawsuit in early January 1998. The book again quotes her: “They threatened my children…. They took one of my cats and killed another. They left a skull on my porch…. They followed me…. They subjected me to a campaign of fear and intimidation trying to silence me.”

Three of Willey’s car tires were punctured with a nail gun. Once, while she was jogging, a man approached her on the road and mentioned her missing cats, then her children, and finally some of her friends’ children. Then he came closer and uttered these ominous words: “You’re just not getting the message, are you?”

The Clintons’ War on Women examines many other topics, as well: Bill Clinton’s association with sex criminal Jeffrey Epstein; his pardon of international fugitive Marc Rich and his own brother, Roger, for drug dealing; Clinton’s own drug use; Hillary’s role in the travel office scandal; Hillary’s action in the Benghazi killings; and multiple other notorious activities.

Among the more interesting revelations in the book is the allegation that Hillary played a critical role in the tragedy at Waco, early in Clinton’s first term. Stone and Morrow provide evidence that pressure was placed upon Attorney General Janet Reno by Webb Hubbell (Clinton’s associate attorney general) and Hillary Clinton. The authors conclude that Hillary was coordinating the White House response to the Waco crisis, along with Hubbell (a former Rose law firm partner with Hillary Clinton) and Deputy White House Counsel Vince Foster.

Foster’s later suspicious death by gunshot wound to the head (ruled a suicide) is also covered at some length in the book.

Monica Lewinsky is likely the most famous White House intern in American history, but then-First Lady Hillary Clinton’s intern Huma Abedin is perhaps even more important. After Hillary left the White House, Abedin attended George Washington University, and kept in touch with Hillary. During this time, Abedin became editor of the Journal of Muslim Minority Affairs, a publication linked to the Muslim Brotherhood. The journal was founded by Abdullah Omar Naseef, a wealthy academic from Saudi Arabia who was a financial backer of the al-Qaeda terror network.

After Hillary was elected to the Senate, she employed Abedin as her aide. Later, Abedin became the chief of staff during Hillary’s unsuccessful 2008 presidential bid. Following that, Abedin served as deputy chief of staff at the Clinton Foundation. When President Obama named Hillary secretary of state, Huma Abedin worked at the State Department during Hillary’s controversial tenure. Now, this woman is working for Hillary’s present presidential campaign. In 2012, five U.S. congressmen sent a letter to the State Department’s deputy secretary general alerting him that Huma’s mother and brother were members of the Muslim Brotherhood, as had been her deceased father. Interestingly, it now appears that all Huma Abedin’s State Department-related e-mails have been destroyed.

This book, however, is not just a partisan Republican exposé. Among the most interesting issues covered is an exploration of the relationship of the Clintons with the Bush family.

The authors call this relationship “mutually beneficial.” Jeb Bush, son of one president and brother of another, awarded Hillary a “Liberty Medal” from the National Constitution Center in 2013, stating, “Former Secretary Clinton has dedicated her life to serving and engaging people across the world in democracy. These efforts as a citizen, an activist, and a leader have earned Secretary Clinton this year’s Liberty Medal.”

The authors find it perplexing that the Bushes “have never shown the kind of rancor toward the Clintons that they have with Republicans who have contested the elections of George Bush.”

Former President George Herbert Walker Bush helped rehabilitate the image of Bill Clinton after Clinton’s presidency, with the elder Bush even referring to Clinton as another son.

Former First Lady Barbara Bush even gushed in January 2014, “I love Bill Clinton.” The daughter of George W. Bush, also named Barbara, once described Hillary as “unbelievably accomplished,” adding that it was her hope that Hillary would run for president in 2016. And George W. Bush himself has called Bill Clinton his “brother from another mother,” and Hillary as like a “sister-in-law.”

Stone and Morrow’s new book on the Clintons helps underscore why Republicans are rejecting the candidacy of Jeb Bush as the 2016 Republican Party nominee, as well as why so many Americans fear another Clinton presidency.