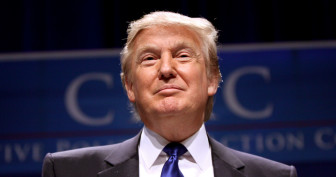 The latest poll results from Rasmussen weren’t cheered by the GOP establishment, which has been holding its breath for months, hoping that the frontrunner would fade and allow someone more willing to toe the establishment’s line to come to the fore.

The poll, taken last week, wasn’t encouraging: 63 percent of Likely Republican Voters think Donald Trump will be the Republican Party’s nominee for president (up from 59 percent the week before), while 51 percent of all likely voters agree.

Trump’s claim that President Obama’s decision to allow 10,000 Syrian refugees into the United States next year is the “ultimate Trojan horse” continues to resonate with voters who, according to Rasmussen, oppose Obama’s decision.

The first salvo of attack ads from the political action committee New Day for America (a pro-Kasich group) was launched last Thursday, picturing Trump standing next to Obama and claiming, in light of the Paris massacre, that “on the job training for president does not work.”

This followed anti-Trump ads from the Club for Growth, an anti-tax and small-government group, in September and October in Iowa. It cost them $1 million and the group credits Trump’s slight, and brief, decline in the polls there as evidence that the strategy works.

A memo leaked to the Wall Street Journal last week announced a new “guerilla” offensive, called Trump Card LLC, headed up by a couple of former Republican National Committee operatives, Liz Mair and Rick Wilson. In the memo Mair called the group “highly confidential” so that donors won’t be tied to the group directly. Noted Mair, “Their fingerprints will be kept off things.” The push behind the startup is expected to come from donors who have been disappointed at Trump’s continued resonance with Republican voters. Said the memo: “In the absence of our efforts, Trump is exceedingly unlikely to implode or be forced out of the race.”

The plan is to enlist the financial support from donors behind other Republican candidates who are concerned that Trump’s alleged support for a Muslim database (he backed away from that on Friday), and his suggestion of building a wall to keep illegals and refugees out, were so far outside the Republican Party’s agenda that Hillary Clinton would win the White House easily next November.

Mair will do the fundraising and Wilson will be designing the attack ads, which they brag will be “blunt,” “outrageous,” “bizarre,” and will utilize a Trump impersonator insulting people and attacking his campaign and the candidate in “stark, nasty” terms. Their goal is, according to the memo, to discourage Trump supporters from voting at all.

When Trump heard that the pro-Kasich group was funding some of those ads, he laughed it off: “I want to do negative ads on John Kasich, but he is so irrelevant to the race that I don’t want to waste my money.”

However, when he learned that Karl Rove, founder of the American Crossroads PAC, was going to join in the anti-Trump campaign, he stopped laughing. In an interview last week with Henry Blodget, editor-in-chief of Business Insider, Trump excoriated Rove as an incompetent elitist Republican insider:

A guy like Karl Rove … Karl Rove is Republican establishment. [His PAC] spent [in the last election] cycle, $430 million and lost every single race.

I saw the commercials and the things that he was making. They’re the worst I’ve ever seen. I thought they were made by the Democrats.

Just throwing darts you can do better than that. [They] have guys like Karl Rove who are really incompetent people. All you have to do is look … at his record. It’s a horror-show.

At the moment Mair’s startup is having trouble getting off the ground. While her goal is $250,000 from anonymous donors not willing to leave their fingerprints behind, she suffers from a notable lack of success in the past. She helped lead the online media campaign for 2008 Republican nominee John McCain while at the RNC, and she also advised Carly Fiorina in her failed run for the Senate in California in 2010. When Dan Riehl looked into the matter for Breitbart on Friday, he found that just $356 had been raised.

But if Trump continues to dominate the polls, and as the primaries in Iowa and New Hampshire (February 1 and February 9 respectively) draw closer, those donors could open their checkbooks and get serious about ridding the campaign of the troublesome outsider altogether.

If Mair’s Trump Card LLC is successful in doing so, it will serve as a warning shot across the bow of any other candidate thinking of crossing wires with the establishment insiders running the Republican Party.