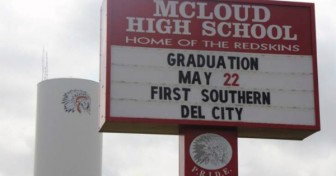 The school board of McLoud Public Schools — McLoud is located east of Oklahoma City — has voted to keep the “Redskins” nickname, despite the typical complaints from the politically correct crowd that the mascot is a slur on Native Americans.

Capitol Hill High School, part of the Oklahoma City Public Schools system, saw its Redskins mascot changed by the school board, about this time last year. Although most faculty, students, and community members appeared to support the Redskins moniker, in use for almost 90 years, the board acted virtually without any input from either the student body or alumni.

In the case of McLoud, however, the community was made aware that the Redskins name might be dropped, resulting in a board meeting packed with so many supporters of the name, that not all those who wished to attend could even get in the front door.

A principal supporter of changing the name was Woodrow Wilson, an American Indian, the school’s Indian education director. Wilson told the board that he knew of a family who found the mascot so offensive that they refuse to take part in extra-curricular activities at the school, such as sporting events that prominently feature the “Redskins” mascot.

Wilson said many who are offended are “afraid” to step forward.

Most of those at the meeting who opposed the mascot were from outside the community. Their argument was basically that the word “Redskins” is an obscene racial slur. Summer Wesley, a Choctaw Indian who is a lawyer, warned that the school could lose federal funds if they kept the name. She cited the American Psychological Association, which claimed all Indian mascots should be retired, because terms like “Redskins” cause damage to the psychological development of American Indian children.

An unidentified student spoke in favor of the mascot, on behalf of the McLoud High School Inter-Tribal Club. She disputed the remarks of what she called the “outside voice,” arguing that they “do not speak for our local native community. We are not being manipulated by others; we’re speaking out our own opinions. Not a single member of our tribal club find the Redskin name offensive. We find the Redskin name … an honor.”

A petition bearing the names of hundreds supporting the continuation of the “Redskins” mascot was given to the board.

The Kickapoo Tribe of Oklahoma has its headquarters in McLoud, and they issued a statement in support of keeping the Redskins mascot. Mosiah Bluecloud spoke on behalf of the tribe. “It’s in reference to the paint we used…. We painted ourselves with red paint. It’s written down by a linguist, a famous linguist and one of my heroes, Ives Goddard, who talked about how the term started out as what we called ourselves. Redskin was not something the colonizers gave to us. We took that name, and it was translated.”

Bluecloud’s position — that the term Redskins originated with indigenous peoples themselves — appears correct. Chief Mosquito of the Piankeshaw tribe is recorded as having addressed an English officer in 1769, using the phrase, “if any red skins do you harm.” In 1812, Osage Chief No Ears made this statement: “I know the manners of the whites and the red skins.”

Adrian Jawort, in his November 13, 2012 article in Indian Country Today entitled “Redskins Not So Black and White,” said that it was simply “revisionist history” to assert the term “redskins” came from the practice of paying a bounty for Indians (using a “red skin” in reference to a bloody, red scalp of a Native American). Other such origin stories are also as concocted out of thin air, such as those false claims that Chief Seattle was some sort of 19th century Al Gore environmentalist. It is all just liberal myth.

On June 18, 2014, the Trademark Trial and Appeal Board of the U.S. Patent and Trademark Office cancelled six trademarks held by the Washington NFL Redskins, in a 2-1 vote, declaring that “Redskins” is disparaging to a “substantial composite of Native Americans.”

Congressman Tom Cole of Oklahoma, a strong ally of former House Speaker John Boehner, joined the effort, dismissing the “Redskins” moniker as a racial slur. Cole, a moderate Republican with a mere 52 percent Freedom Index score from The New American magazine, told NFL Commissioner Roger Goodell that the name should be changed, because the NFL is “on the wrong side of history,” and it is inappropriate for the Redskins to “profit from the continued degradation of tribes and Indian people.”

Observers have noted that a U.S. congressman deciding the mascot names for a professional sports team is hardly an example of limited government conservatism.

It is logical to presume that nicknames and mascots are chosen for sports teams — whether at the high school, college, or professional level — because the teams are proud of the names. It is illogical that anyone would pick a mascot with the intention to ridicule any group. One can safely presume that the Minnesota Vikings are not desirous of insulting those of Norwegian ancestry, and that the Texas A & M Aggies have not chose to poke fun at farmers. Does anyone really think that Notre Dame hates the “Fighting Irish?” Did the New Orleans NFL franchise choose the term “Saints,” intending to insult Christians?

A poll of the Annenberg Public Policy Center at the University of Pennsylvania, which revealed that about 90 percent of the self-identified American Indians are “not offended” by the use of the Redskins name by the Washington NFL franchise, would seem to indicate that most persons of Native American ancestry have no problem with the term. At Capitol Hill, where the board changed the name last year, student Juanita Freeman, a full-blood American Indian of Black Foot and Cherokee heritage, was very upset with the decision to drop the Redskins. “I am very proud to be a Redskin,” she told the board, noting that she owns about 30 shirts displaying the Redskins mascot of the school.

Yet neither her opinion nor those of a vast majority of the students and alumni was even considered by outsiders who pushed through the change.

So why is there such a push to eliminate Indian sports mascots, in general, and the Redskins mascot, in particular?

Part of the answer is that it has been a leftist tactic, since at least the French Revolution, to divide society into antagonistic groups. Karl Marx, the author of the Communist Manifesto, saw such a “class struggle” as a good method of advancing the cause of communism. Because of this, it is a common tactic of the Left to use existing animosities between different ethnic groups, and if they do not exist, to create them. Young are pitted against the old; men against women; the poor against the rich; and, of course, charges of racism are often used to advance some element of the liberal agenda.

This advances the goals of the Left because the solutions offered are always more government control in some fashion. For example, a continuing effort to demonize Christopher Columbus is part of the larger campaign to undermine the foundations of Western civilization. It is the same as the motivation for attacking the historical reputation of men such as George Washington and Thomas Jefferson. Because once these men are set aside as objects of admiration, they can be replaced with leftist icons, for the purpose of advancing a secular and socialist agenda.

Written by Steve Byas, a professor of history at Hillsdale Free Will Baptist College in Moore, Oklahoma. His book, History’s Greatest Libels, challenges some of the great lies of history.