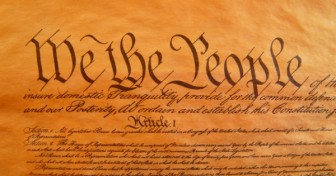 The Second Amendment reads, “A well regulated Militia, being necessary to the security of a free State, the right of the people to keep and bear Arms, shall not be infringed.” Compare that to the First Amendment, which reads, “Congress shall make no law respecting an establishment of religion, or prohibiting the free exercise thereof; or abridging the freedom of speech, or of the press; or the right of the people peaceably to assemble, and to petition the Government for a redress of grievances.”

One immediately notes that the prohibitions contained in the First Amendment are specifically directed at Congress. Which is understandable, considering, for example, that the individual States each had their own preferred religion at that time. However, the Second Amendment does NOT address Congress in particular. Interesting.

Also, the Second Amendment acknowledges the right to keep and bear arms as a right of the PEOPLE, as opposed to powers delegated to the National or State governments. Keep in mind that all of this is in the same Bill, commonly known as the Bill of Rights,so any argument of incorporation – that the Bill of Rights doesn’t apply to every level of government – is moot. The fact that the pre-existing right is acknowledged in the Second Amendment is all the proof we need of incorporation, and we don’t need nine people in robes to tell us so.

At this point, it is important to refer to the Declaration of Independence in order to illuminate my mention of a pre-existing right. The Founders held, self evident, that we are endowed by our Creator with rights and that governments are instituted to secure those pre-existing, Creator-endowed rights. We don’t get our rights from men, nor pieces of paper. To imagine such is to immediately render those rights into revokable government granted privileges. So when we remember that the role of government is to secure our rights, any misuse of the Law as a means to infringe upon our rights becomes immediately evident, and can be opposed as abhorent to the Constitution and original intent.

An examination of the wording of the Second Amendment leaves no doubt as to the intent of the Founders. The phrase “well regulated Militia” means the body of the people, not in a standing army, being well accustomed to and familiar with their arms. To regulate a thing is to make that thing regular. Regulated, in this context, could not mean restricted, or infringed upon. The idea of a well restricted Militia is ridiculous on its face. Obviously, the misinterpretation of the Second Amendment as “A well infringed Militia, being necessary to the security of a free State, the right of the people to keep and bear arms shall not be infringed” makes no sense at all and would render the whole Amendment a pointless self-contradiction.

Therefore, it is reasonable to conclude that the Constitution precludes ANY arms infringements, by the definite legal term “shall not”, no matter the claims of any governmental authority to the contrary. The right is reserved to we individual citizens, otherwise known as the People.

The Constitution is not an outdated historical document, as some try to portray it. It is quite literally, the Law of the Land. Any subsequent laws that do not pass Constitutional muster are null and void.

It is these Constitutional principles, and the Article VI Oath, which compel me to stand in opposition to the many thousands of arms infringement laws we are currently subjected to in this Nation. Show me a “common sense gun control law”, and I’ll show you an unconstitutional arms infringement.

It is incumbent on every politician, police officer, service member and anyone else, who has taken the Article VI Constitutional Oath, to read and understand the Law they swore to preserve, protect and defend, against all enemies, both foreign and domestic. You did not take an Oath to let someone else tell you what the law says. You took an Oath as an individual, and ignorance of the Law is not a legal defense. If you don’t personally read and understand the Law, how can you possibly honor your Oath of Office? Read it. Understand it. Honor your Oath to the Constitution. It’s not just a good idea, it’s the Law.