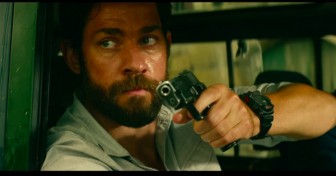 Just in time for the kick-off of the electoral season comes a movie that reminds Americans yet again what is wrong with the government we have endured for the past eight years. The riveting 13 Hours: The Secret Soldiers of Benghazi, directed by big budget action film director Michael Bay and based on the nonfiction book 13 Hours by Mitchell Zuckoff, is a soldier’s-eye view of the notorious terrorist assaults on two American compounds in Benghazi, Libya, on September 11, 2012. The movie is not for all tastes, featuring combat violence aplenty (though no gratuitous gore) and an excess of R-rated language. But it is political storytelling at its best — precisely because it tries very hard to be subtle. There are no overt references to Barack Obama and Hillary Clinton, for example, even as the frustrating paralysis of official government channels puts lives in danger. But the viewer is left in no doubt as to who the worst villain is: not the battalions of Libyan terrorists, but the government functionaries unable and unwilling to make the hard decisions.

We all know how the story ends: on September 11, 2012, four Americans, including U.S. Ambassador to Libya Chris Stevens, lost their lives, and the political finger-pointing continues. 13 Hours shows us how events unfolded, based on eyewitness accounts. The story centers on six security consultants charged with beefing up the defenses of a secret CIA compound in Benghazi whose very existence is unknown even to high-ranking officials in the U.S. government and military. As former Special Forces and combat veterans, they are unaccustomed to the cautious, bureaucratic ways of the CIA.

The station chief, played ably by David Costabile (of Breaking Bad fame), is mostly concerned with finishing up his tour of duty in Benghazi incident-free and with keeping intact the chain of command at any cost. Even when the diplomatic compound is attacked, with the flames and gunfire visible in the distance and personnel there pleading for help over the radio, Costabile’s nameless CIA chief stands firm, preventing the six security contractors from going to their aid — because he has not received authorization from his superiors, and because he fears what might happen if the six get themselves killed.

Eventually, of course, the six defy his orders, only to find the compound already burning and most of the perpetrators fled. Correctly anticipating that the “secret” CIA compound will be the next target, they make their way back across town to defend the American personnel trapped there, in an epic, three-part gun battle that lasts until dawn.

Read the rest at The New American Magazine.