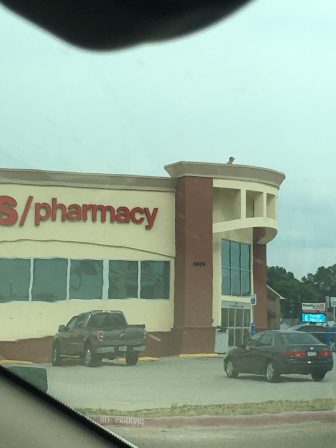 At a little after 5:00p.m. today, July 15th, there was no sign of the Black Lives Matter group gathering in Texarkana at the CVS on the Arkansas side. Rumors have run across social media that tonight, the alleged “Day of Rage” will see the movement in Texarkana demonstrating. Texarkana police forces, both Texas and Arkansas, have addressed the concerns on social media by ensuring residents that the force will be out in full to protect and ensure safety for everyone.

An unknown man could be seen standing on to of the CVS building. It was not clear if he was a camera man, maintenance for CVS or connected with law enforcement, but as traffic slowed on Stateline briefly to watch him, it was clear that social media rumors does have the attention of citizens at the least.

One man earlier in a store stated that he wasn’t going out tonight. He was going to leave the store, go home, and sit in his chair and watch it all unfold on television. While some are saying there is no reason for concern, the only sure thing at this hour is that the police forces of Texarkana are watching as at least two patrol cars were observed sitting near CVS today. It remains to be seen if there will be a peaceful demonstration or if the rumored “Day of Rage” will sweep into Texarkana.