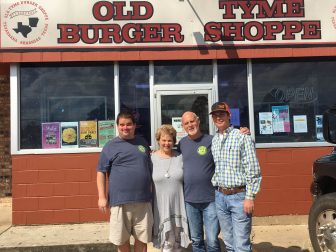 Texarkana, USA – In 1991, Tom and Marcia Collins discovered that Bobbie Grammer and Debbie Grammer had decided to sell the small hamburger shop they had started in Texarkana. Tom and Marcia immediately thought of Marcia’s brother, Randy Thomas, as a potential partner in the business. Although Tom had restaurant experience, Randy did not. Randy insisted that he was in marketing, not cooking, but after a family meeting they decided to purchase the business.

Tom Collins and Randy Thomas then set out to ensure that the business was not only successful, but that it also operated as a family-based business. It seemed like everyone in the family had suggestions, ideas, and contributions to make. Tom and Randy’s parents made pies, gave cooking advise, and even prompted the business to ensure the hamburger buns were toasted.

As the two men worked the business, they eventually brought in their children and continued to provide an atmosphere where people simply wanted to go and stay. Justin Thomas, Randy’s son, notes that one lady cooking at Old Tyme Burger was cooking there when he was a kid. Both Thomas and Justin stated, “She cooked my breakfast when I was a little kid, and she’s still cooking my breakfast today.” Eventually Justin, Tom’s son Thomas, and their sisters all worked various jobs within the restaurant. One sister would even drive home from school to work weekends in the family business.

It took very little time for the restaurant to grow a reputation in town. During the past twenty-five years, members of Congress, Lt. Governors, Senators, and state and local representatives have all ate at Old Tyme Burger. According to Thomas, some have simply come in and ate and other have had news crews there monitoring them. Despite the variety of people visiting the establishment, the family continues to operate with a grandmother’s slogan – “Never think you’re better than anyone else, but you’re just as good as anyone else.” That view has carried the restaurant to grow into a local favorite.

The family reports that their success has continued on “word of mouth” around town. They noted that one couple met at the restaurant twenty years ago and continues to return each year for their anniversary dinner. Another group of men meet each morning to play a game at one of the tables and drink coffee. During a visit with the family, it was noted that several people walked up to the table and spoke with the family. It seems people are willing to talk with the owners about anything from the cattle business to the weather.

Another cornerstone of the business has been flexibility. The Old Tyme Burger, in the words of Justin, will try to fix anything a customer request, if they have the ingredients. The restaurant offers veggie burgers, vegetables plates, and will even try to meet special diets if folks will let them know what they need. The positive attitude and willingness to always put the customer first helped the restaurant to expand into a second seating area about fourteen years ago. Today the restaurant has won several burger awards and continues to buy their meat fresh and ground daily for their famous burgers.

Despite the continued success of Old Tyme Burger Shoppe, change always comes. The family lost Tom Collins in 2014. Randy Thomas, the marketing person first thought of by his sister and Tom, has been called by the Lord to take up a new job. Randy will be leaving the restaurant soon to answer his call to serve the elderly. He will be the marketing director for The Retreat at Kenwood. This change will result in the passing of the family business to the next generation. Thomas and Justin will assume the reigns and operate the business. Justin has inherited his father’s marketing views, while Thomas is rarely seen outside the kitchen cooking or visiting directly with customers in the restaurant.

Justin and Thomas have several new plans for The Old Tyme Burger shoppe as they move forward. They plan to offer a dinner pick up service with a slogan of “From our table to your table.” The goal is to expand Old Tyme Burger to a point where it is not only a great restaurant to visit, but a favorite place for pick up or take out food. The hours will change soon as well. Starting October first Old Tyme Burger will be open 6 a.m. to 6 p.m. daily except for Sunday and noted holidays.

The Old Tyme Burger certainly has a long and wonderful past that is part of Texarkana’s rich history. It is likely that this family-owned, family-operated business will continue well past the current generation and into Tom, Marcia, and Randy’s grand-kids. Both Thomas and Justin noted that their kids are already starting to learn about the operation. The Four States News wishes Randy all the best as he takes up his cross and follows his calling, and we wish the best to Justin and Thomas as they continue the family tradition. Here’s to another 25 years of great food and great friends at Texarkana’s Old Tyme Burger Shoppe!