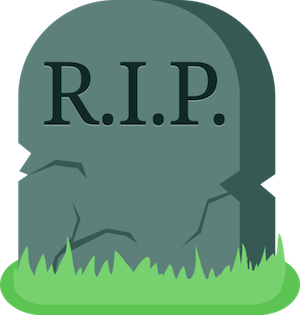 Death. It’S A Word That Many People Fear, Some Wish For, And Other Simply Accept As The Final Stage Of This Life While Opening The Mysteries Of What Comes Next. No matter how you view death, the one thing that is certain is that it will eventually visit you.

It seems as I get older I am reminded of all those “Old” people I used to hear saying things like, “Well, there are fewer of us than there used to be.” From the late 1980’s and even through today we hear it a lot about the “Greatest Generation”. The word is death is visiting more and more of them. I saw it in my grandparents, and I’ve seen it in my friend’s grandparents pass from that generation, but now the time has come where I’m seeing it more from people I know outside of family. As I said, I’m at that age where there are simply “fewer” of us than there used to be. The other day I picked up a book that many of my friends had signed back in 1997. As I read through the list, I realized over ninety percent of the signers were now dead. I am certainly seeing death as a frequent visitor in my small realm of friends.

I guess it’s normal even natural, for people to start thinking about death when they reach this age. I had a harsh reminder recently when a dear friend of mine died. This marks the first year that I have not received multiple telephone calls from him during the annual tax season. My friend did income taxes for people and he always had computer questions, or wanted to be sure that I understood how to do taxes. His calls might be to ensure I got “us” the latest software, or to inform me that his computer would not print. I’d go off to his home, fix the issue and we’d spend a lot of time talking about the new tax laws. My friend died in December. The last time I talked with him was August. Now as I move into the second month of the tax season, I’m finding that the lack of telephone calls from him is depressing. It’s a reminder that he is not here anymore and that he won’t be calling. It’s also a reminder that all our days are numbered just like those tax forms were.

So as I contemplate death, I have a firm Christian foundation in where I will go and spend eternity, but that doesn’t stop me from wondering. I find myself adding up the ages of my kids and thinking things like “Well, they will be one hundred in this year or that year”. I realize that as they reach those later years in life it will be long after I’m gone. As I said, I am confident where I will be in that time period, but it doesn’t stop me from wondering what will happen here. What new things will develop, be created, start, and what new people will I miss meeting?

I find myself thinking about friends and wondering if they will outlive me, or will I outlive them. How will we die – old age in a nursing home bed somewhere, or will some disease or incident rob us of a few years. The fact is nobody knows when they will go. I remember at my twenty-year class reunion seeing a group of pictures of classmates who had died. I kept thinking “It’s only been twenty years!” Much like the old poem, I want to yell to my friends, family, to myself “Rage, rage against the dying of the light!”[1] There’s so much to this life to be missed when we go. There is new advancements, new friendships, card games to be played, places to be seen, and friendships that do not deserve to be left behind.

I know there will come a time when I close my eyes for that final moment in this life. I know I will leave behind friends, and be greeted by friends who have faced death before me. I do not fear death. I am not afraid of what waits in the next life. No, I to quote a Dr. Who episode, simply “don’t want to go.”[2] I want to stay, and do more. I want to live this life to the fullest. I guess I just, like many people, don’t want these great times that we live in to be lost. I don’t want to miss a single moment of friendships, laughter, fun, and growth that God has given us in this world. But even as I contemplate these things, maybe it all simply boils down to the way I feel when others leave. Maybe it’s because I want one more season of my friend calling me to say his computer won’t print the tax returns.