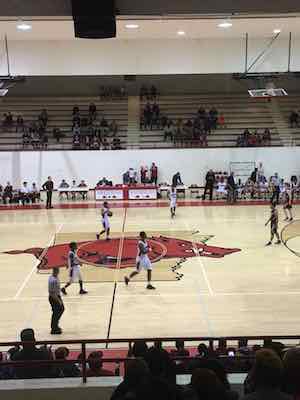 Texarkana, AR – The Arkansas High men’s basketball team took their first step in the playoffs last night against Benton. Both teams had multiple three point shots and inside shots, but Arkansas came out on top with a 66-40 win.

The game was held at the home stadium in Texarkana with full crowd. The band performed during intermission and time-outs while the cheerleaders encouraged the crowd. The Arkansas High Redline performed an outstanding half-time show followed by the Hogs putting more points on the board during the second half of the game.

The game concluded with Hog fans on their feet cheering as the final buzzer sounded. The Hogs will now head off to El Dorado this weekend for the next round in the playoffs.