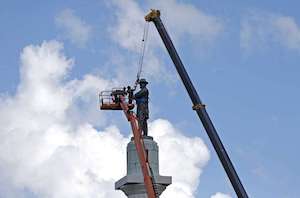 The letter below was submitted by Leslie Quillen regarding the removal of the monuments in New Orleans:

“At 6:06 pm, CST, The death of the city of New Orleans was completed. All for a forked tongued politician with no social etiquette and no morals to be king of the hill. He blames the greatest military men in history of being racist, slave owning, and destroyers of the unity of the original America. He lies, cheats, and steals, and says the crime rate is due to four monuments that have been standing for over 100 years. He paid city workers to destroy monuments that are protected under Federal law. He lied to the fifth circuit court about the funding and the removal. He lied about them being sheltered in safety until a “proper” place for them is found. He insulted the intelligence of the citizens of the Southern states, and he stole their ancestors dignity. His ego growing larger as each monument fell. The question now is what will he blame the continued crime on? The poor education system, and the infrastructure as well?

I am officially in a rage that will not end until those monuments are back up where they belong, or at a respected and qualified museum. Jeff Davis’ last home was Beauvoir in Mississippi. They have asked several times for the monuments. They have received no answer. I would suggest that the monuments be sent there. They do not belong in some junk yard that the evil idiot has determined to be safe. I can only hope for divine intervention at this point. Mitch is being exposed for all the trashy things he is doing and has done in his past. I hope his wife takes him for every penny he has ever made since he is sleeping with a city worker and has impregnated her. I can honestly say, Huey P. Long had NOTHING on these corrupt bastards.

To the people of NOLA, I heard the cheers and the songs being sung. The grand party you had when Lee was laid low. I hope you enjoyed that party. The Boycott of everything Louisiana will be your demise. No federal funding and lack of tourism will be the nail in your coffin. Your hatred of history because you are uneducated and lied to will be your downfall. I can say, you deserve all you get after the show you put on. Classless and obscene.