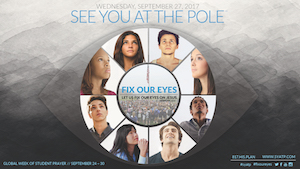 Texarkana, USA– For years prayer was a part of our public school systems across the nation until the age of forced separations became the norm. Although nobody was made to pray, eventually courts caused the schools to pull prayer from their daily routines. At that time, prayer in the schools became “A moment of silence”. Students were encouraged to reflect on their upcoming day, think about assignments, meditate or just pray if they wished to do so. Then even the moment of silence was almost completely removed from the schools.

The interesting thing about those who wish to pray, especially young, growing, Christian students, is they will find a way to pray no matter what. In 1990, a small group of students found the perfect place, the perfect way, and the perfect movement to keep prayer alive. From that point forward, the movement grew across the nation and around the world.

The fourth Wednesday of each September has now become National See You at the Pole day. Students of the nation and the world gather together at the school’s flagpole. They have both public and private prayer time. They come together in rain, shine, snow and just about any weather you can imagine. Their time is brief, their prayers are brief, but their statement is powerful. They have said to the world and the governments of the world that you can drive prayer out of our schools, but you can not drive it out of our hearts, minds and souls. So with each fourth Wednesday of September a new generation of school aged prayer warriors come together to define themselves and rise above society and the expectations set by it.

On Wednesday September 27 at 7:30 a.m. the Razorbacks of Texarkana will carry on the tradition of See You at the Pole. They will meet at the flag pole in front of the main building (the Red Wall Building) at Arkansas High’s campus. All students and members of the community are welcome to attend. Students will lead prayers and pray for the school, the community and the nation.

Tonya Dunphy has sponsored the See You at the Pole at Arkansas High School for the last five years. The Fellowship of Christian Students (FCS) is the sponsoring group with the event. Mrs. Dunphy noted that many other schools in the area have participated in the past. She felt confident that others would be doing similar events this year. She stated that the FCS at Arkansas High has several local churches involved. “We’re always open to other churches joining us and helping, and we currently have a wonderful group dedicated to helping the program,” Mrs. Dunphy said. She stated that Beech Street Baptist, Central Baptist Church, Church on the Rock, City Church have been involved for sometime. This year two new churches are partnering to help with the addition of Cornerstone Baptist Church, and Westside Church of Christ.

Mrs. Dunphy informed us that in addition to See You at the Pole as an annual event, the FCS meets weekly on Thursday’s during all three lunch periods. She said they bring in youth pastors to have a devotion time with the students. Also when funding allows, pizza is provided so that students do not miss lunch during the Thursday devotions. She notes that the school district and Mrs. Nadeau, have always been supportive of the FCS and allows us to use a room on campus for the Thursday meetings.

The theme verse for this year’s event is Hebrews 12:2. Mrs. Dunphy noted that Arkansas High always has a good turnout and that the public is always welcome to the event. See You at the Pole will be on September 27, at 7:30 a.m. Students and the public are welcome to attend.

The Four States News would like to encourage students and the community to participate in this important event. We congratulate Mrs. Dunphy for five years of service and dedication to the school and the community. We extend a thank you to the local churches, and most importantly, we would also like to congratulate the FCS members and students of Arkansas High who have chosen to stand firmly and publicly on their faith. The light of your faith will be what leads the generation after you!