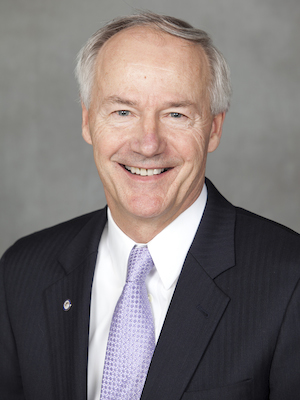 LITTLE ROCK – The Military Retirement Income Tax Cut, which Governor Asa Hutchinson signed into law in February, will go into effect January 1, 2018. The tax cut, which eliminates state income tax on military retirement pay, was one of Governor Hutchinson’s priorities for the 2017 legislative session. The bill passed through the General Assembly with wide bi-partisan support in both chambers.
Arkansas has now has joined the majority of southern states in exempting state income tax on military retirement pay. Governor Hutchinson prioritized this initiative in an effort to recruit more military retirees to the state.
“The average new military retiree is 38-44 years old with another 20-plus years in the workforce,” Governor Hutchinson said. “The skills and experience our military retirees offer are invaluable resources for our state. This tax cut creates tax relief for Arkansas’ 22,000 military retirees, and will encourage veterans to start their second careers in Arkansas.”
Representative Charlene Fite of Van Buren, author of the bill: “I am really proud of this legislation. I have received more than a hundred emails, notes and private messages from people thanking me and saying they were not considering staying in Arkansas but now they are. It is also important to note that many of these retirees are in their late 30s and early 40s. They will be starting second careers, opening businesses, buying homes and investing in Arkansas in other ways.”
Senate President Pro Tem Jonathan Dismang of Searcy: “These are exactly the type of individuals we want in the state of Arkansas, and this tax cut gives veterans one more reason to live here.”
Frequently asked questions regarding the Arkansas Military Retirement Income Tax Cut:
1. Who gets the tax break?
Veterans who are receiving military retirement income qualify for the tax break.
2. Do survivors qualify?
Yes. Surviving spouses and/or minor children who are receiving Survivor Benefit Pay qualify
3. When does the tax break become effective?
The tax break goes into effect on January 1st, 2018.
4. Will I see more money on my January check?
No. The first adjustment will appear on the February checks of those who have adjusted their state income tax withholding in January.
5. Will Defense Finance and Accounting automatically adjust my deductions?
No. To adjust your state income tax withholding, call DFAS at (800) 321-1080 or go to https://mypay.dfas.mil.