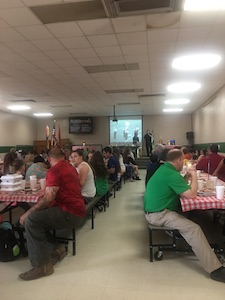 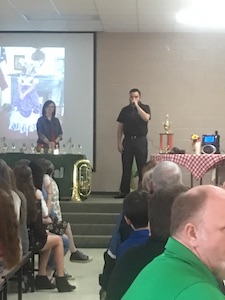 Genoa, AR– Genoa Schools held their band banquet for the beginner and advanced band members last Saturday the 19th. This was the first banquet for Mr. Gray, the band director, and the last banquet for graduating seniors. The guest and band members enjoyed a meal and a slideshow presentation of pictures from the 2017-2018 band year. Pictures included game performances, public performances, and competitions the band had participated in over the year.

During the event, Gray thanked the parents, students, and Band Boosters. He noted that he could not do everything without the support group in the Genoa community. Graduating seniors were recognized and given a gift. Students Chris Battle, Skyler Burris, Faith Overcast, and Harley Hendrix will be graduating this year. They took pictures with Gray and were each allowed to speak to their fellow band members if they wished from the stage.

Mr. Gray was presented with a framed picture of the 2017-2018 Genoa Band. Students then also gave Gray a case of Monster Drinks – apparently this is one of the band director’s favorite drinks. The group closed out the evening taking fun pictures with rabbit ears over their fellow band students, fingers on noses, pointing at one another, and making silly faces. While the crowd could not be certain from where they were seated, it appeared that these pictures may have been taken at the direction of Gray. At the heart of it all, it was apparent that Gray is not just the band director for these kids, but he is also a committed and dedicated member of the Genoa community willing to hang out and just be “with the band.”