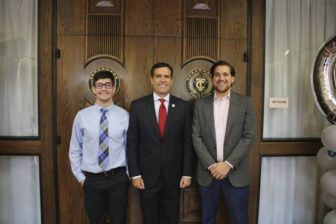 “I’d like to thank Harrison, William and Mayten for their hard work in my Texarkana district office this summer. Serving 700,000 people across 18 counties in Northeast Texas wouldn’t be possible if it wasn’t for the selfless contributions from young folks like them who have such an inspiring heart for civil service,” Ratcliffe said.

Benefield graduated from Pleasant Grove High School in 2016. He is a senior at University of Arkansas, pursuing a degree in communication studies. Benefield enjoys playing pick-up basketball, tennis and reading.

Benefield said he was thankful his internship taught him how the federal government operates on a day to day basis, and how Congress works to resolve real-world issues.

“It was a very eye-opening experience. Many of the issues I heard about, I never knew existed. The work I did greatly strengthened my research skills and communication skills,” Benefield said.

Humphrey graduated from Pleasant Grove High School in 2017. He is a sophomore at Texas A&M University, studying political science. Humphrey works at Chipotle and leads a small group Bible study at his church.

Humphrey said he enjoyed learning how congressional offices function, and how district offices work in conjunction with the Washington D.C. office to serve the constituents of Northeast Texas.

“Seeing how much this office cares about its constituents really opened my eyes as to what politics really should be about – it should be about serving the people,” Humphrey said.

Lumpkin graduated from Texas High School in 2017. He is a sophomore at the University of North Texas, studying economics. Lumpkin was in a diving accident in 2016 that left him in a wheelchair, but he loves spending time with friends and playing with his dog.

Lumpkin said his internship was a wonderful experience, and that he was grateful to witness, first-hand, the work being done for the constituents in the 4th District of Texas.

“I learned that the work being done here is very valuable, and it is for the people of our district,” Lumpkin said.