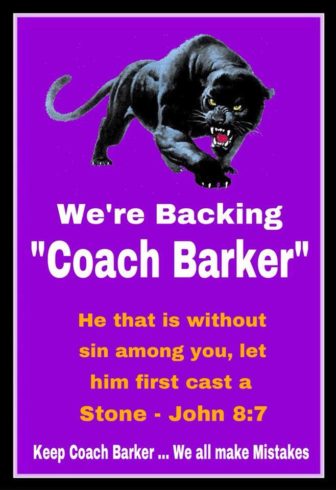 Since the breaking news of Coach Ricky Barker’s public intoxication arrest, various opinions have been circulating on social media. Some people have come right out and said that he should be fired, but in Fouke there also is a growing group of supporters for the coach. That growing support seems to be based on the positive impact that Barker has had on the community and students.

Several people have made positive statements such as “people make mistakes” and “shouldn’t we forgive” or “nobody is perfect”. Others have gone as far as to say that what the coach did may have been wrong, but that it is certainly no reason to fire him. One Fouke resident said, “Had the coach been driving with a bus full of kids and was drinking, then heck yeah he should be fired. But he wasn’t.”

Along with the positive and negative discussion, there is even talk about a potential meeting at the school to discuss the issue. Some people have suggested that the football team will line the roads and show support for the coach when there is a meeting. Others have suggested that they will testify on the coach’s behalf. One parent noted that his kid was going nowhere and had some major issues before Coach Barker came along. The parent went on to say that Barker started working with the young man and that behaviors, attitudes and in fact the young man’s entire life turned around for the positive. That parent said, “Nobody can take away how much it means to us that Coach Barker helped our son.”

Whether the football team and students show up to support Coach Barker will be unclear until there is a meeting. Many residents have stated support already on social media for the coach and have also stated an intent to be at the any planned meetings. There is currently a rumor that when there is a meeting it may be closed. At this time there has been no official posting from the school regarding a meeting. Signs have been showing up on Facebook with one citizen making the sign posted above reminding people of the need for forgiveness. At the time of this article, the sign above was posted on the “Miller County, AR Alerts and crime awareness” page had over twenty-six comments with people still commenting when we checked.

The one thing that is apparent on social media is that there is overwhelming support and evidence from the community that Barker has had a positive impact on the students at the Fouke School District. Hopefully, when there is a meeting held, they will keep in mind the positive attributes of the coach in any decision they feel compelled to make.